I spent quite a while chasing down a problem in a Cleanflight v1.13 flight controller which would not start properly, giving a series of beeps that one might expect hinted the problem. 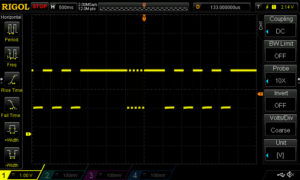 The documentation file Buzzer.md did not mention this beep pattern.

However, deep in the source code in system.c and system.h is the code that generates this beep pattern. The 5 short pulses are a signature for initialisation failure, and the number of long beeps is one higher than the failure mode.

So, in my case the problem was mode 3 failure, accelerometer incompatibility.