Seeing the promotion of a clear adhesive with cure initiated by ~400nm UV light from a LED source, one’s mind wondered to its application for attaching temperature sensors to heatsinks etc.

A sample of Kafuter K-300 was tested. 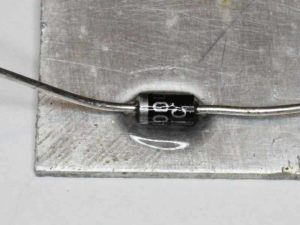 Above is the test jig, a 1N4004 diode is attached to the corner of a scrap of 1.6mm thick aluminium sheet using the adhesive which was cured with UV light and then allowed 10 hours further to strengthen (if that helps).

A current of 1mA was passed through the diode and the voltage monitored as it was heated. Silicon diodes have a temperature coefficient of very close to -2mV/°, so the temperature can be determined from the voltage drop.

To make the process easier, a bench DVM was used and set to relative mode with the jig at 20°.

As heat was applied, the voltage dropped. Response was quite quick, and seemed similar to other applications where a dob of adhesive was used to attach a diode to a heatsink.

The diode became a little loose at 60° and at 70° could be pulled free with a little effort. It seems that it was stronger in cohesion than adhesion.

Loss of structural integrity over 50° severly limits application of this adhesive to temperature sensors.

A sample of “5 second fix” product was tried in the same test. It behaved very similarly to the Kafuter-300, and failed at the same temperatures. Promotional material for this product claims it is “heat resistant” and shows it used to repair drinking glasses… it would seem the repair is unlikely to survive a dishwasher.