Without trying to understand the problem, lets just extract two cases for further discussion, an analysis in the limits if you like.

Above, the animation frame where I is maximum. Note that V is zero at all points.

Above, the animation frame where V is maximum. Note that I is zero at all points.

The above two graphics would give the impression that:

A reasonable assumption is that I is the current flowing in the antenna conductor. It is tangible, it can be measured in practice. The sinusoidal form reconciles fairly well with NEC models of a half wave dipole.

But is that correct?

Lets work a case for 1A flowing in 2mm diameter copper wire at 7MHz:

Voltage is a general sense is the potential difference between two points.

The questions that arise with this graphic are:

If V is the voltage wrt some reference, it is not practical to measure this in an antenna system as any wires to a volt meter will have voltage induced in them due to the antenna fields.

Many plots like this that are labelled V are actually plots of charge Q. Charge can be found by integrating current over time, it does not raise the question of a reference as does voltage.

An interesting similar topology that can be modelled simply

To some extent, as a standing wave antenna, a half wave dipole over ground can be split at the axis of symmetry (in the plane of the dipole), and one half modelled as a lossy single wire transmission line over ground, driven at one end at open at the other.

The voltage V (wrt ground) and current I can be calculated along such a transmission line.

The input impedance of the full dipole would be that the impedances of both sections added.

The tool used to make these calculations cannot handle infinite impedance, so the far end of the transmission line is loaded with 1,000,000,000,000,000,000Ω to approximate the open circuit end. 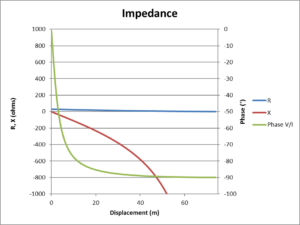 Above is a plot of calculated R,X components of V/I at displacements from the driven end (equivalent to the dipole centre), and calculated phase of V/I.

Without visiting the absolute phase of V/I, the phase difference is not constant. Though for much of the length the phase is -90°, near to the driven end it quickly approaches zero.

The lossy transmission line model suggests that the animation above oversimplifies the problem and probably give some false impressions.

Above is an explanatory diagram from the ARRL Handbook (Silver 2011) under the heading Current and voltage distribution. Though it is a half-baked graph (lacking proper axis scaling and labels), it preaches the same voltage distribution perspective: the current is minimum at the ends, regardless of the antenna’s length. … The opposite is true of the RF voltage. That is, there is a voltage maximum at the ends.

The voltage is the potential between what two points, can it be experimentally verified in a simple measurement, is the voltage plot actually meaningful?

If the original animation was changed so that V became Q, it has the approximate form of the I and Q distribution, and the correct phase relationship between them.