Power Amplifier Run On Timer (PAROT) (Duffy 2013) reported some measurements of the voltage withstand of Veroboard. Voltage withstand between tracks was observed to be just over 1400Vpk.

This article reports some further measurements of genuine Vero strip board. 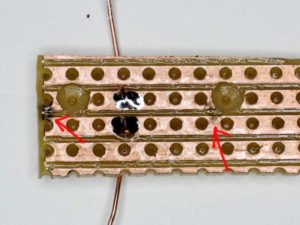 Above is the test piece.

The initial test was before the two tracks cuts were made. The new board from a pack was cleaned (they are pre-coated with flux), and then given a heavy coat of acrylic PCB laquer that was hot air dried. Voltage withstand between the two wires was measured. Flashover occurred at 2800Vpk (50Hz AC), the point of flashover is the small black mark at the left lower end of the second track from the top.

The two track cuts were then drilled and a further heavy coat of lacquer applied and hot air dried. Flashover occurred at 2700Vpk (50Hz AC), the point of flashover is the small black mark at the right end of the energised second track from the top.