(Duffy 2005) showed that the hybrid feed configuration is susceptible to high losses in the low Zo line as it is often longish, is relatively high loss line and operates with standing waves. Varney did offer two options for the low Zo line: any length 72Ω twin or coax.

Lets look at measurement of a real antenna at VK2OMD, broadly typical of the G5RV. The antenna measured is a G5RV of 2mm HDC rigged in Inverted V form, 11m height at the apex and around 8m at the ends. The feed line is 2mm diameter copper spaced 50mm with occasional plastic insulators.

The measurements are to some extent dependent on the environment, and whilst there will be variation from one implementation to another, the measurements provide a basis for exposing the configuration challenge. 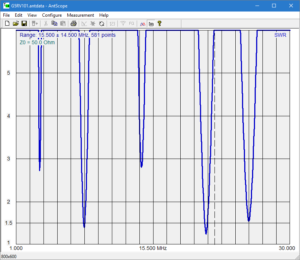 Above is a plot of VSWR(50) looking into 0.5m of RG142 and a Guanella current balun, then an open wire section that is similar to that used in the hybrid feed configuration. This is the character of the impedance presented at the lower end of the ‘matching’ section.

Let us take two spot frequencies in this range and calculate the loss in some different types of low Zo line of 15m length.

We can observe that the feed line loss away from minimum VSWR(50) is worse for the lossier feed line options, the data demonstrates the advantage in using lower loss feed line, AND tuning the system so VSWR(50) is minimum at the desired part of the band.

Popular discussion on online fora suggests that the ‘original’ 72Ω twin which Varney mentions and which is no longer readily available is much better than coax. The table shows otherwise and that the recommendation for Unobtainium is just uninformed ham nonsense… the best option at minimum VSWR(50) from those listed is RG-213, RG-8/X is nearly as good.

It can be seen from the plot above that the low VSWR region is narrower on 80m than on the higher bands, and since losses on 80m may be quite high, tuning the system so VSWR(50) is minimum at the desired part of the band should be a priority.

(Duffy 2006) described a method for optimising a G5RV using very simple equipment, and gave the rationale for tuning.

Both steps can be performed with a modern antenna analyser.

A scanning analyser makes for a convenient overall check and fine tuning.

At the completion of Step 2, make a scan from 2 to 30MHz and check that the other bands ‘drop in’ as desired. If necessary, some minor tweaks can be made by complementary adjustments to dipole length and matching section length to move the higher bands around relative to the 80m sweet spot.