I purchased a ‘ready to use’ AD8307 RF power measurement module on eBay for a project to develop a HF common mode current meter sensor for use with the RFPM1 (Duffy 2014). Price was A$22 incl post. 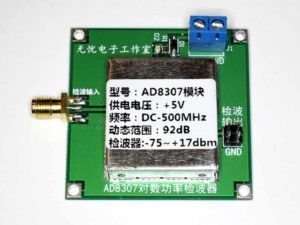 Above, the AD8307 module on a small PCB with shield enclosure. Note the prominent labeling DC-500MHz, but the abundant Chinese language must sound a warning. 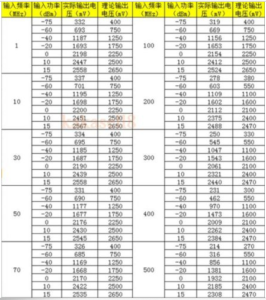 Above is a table describing its performance. Though I cannot reach the Chinese column headings, it would appear that the claimed response is fairly flat from 1 to 500MHz.

How does it stack up?

After considerable pushing, I did get a schematic from the seller (along with a repeat of the table above). Unfortunately, the document is in Chinese. 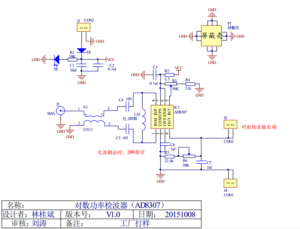 If you are wondering about the 52.3Ω resistor, that is a 1% value, and it is chosen so that in parallel with the 1150Ω input resistance of the AD8307, Rtotal is 50.02Ω. Obsessive attention to detail that in the long run does not result in low input VSWR at all.

Common mode choke E1 is in effect a transmission line with Zo that is probably not 50Ω, and it shunts the input signal with effectively twice its magnetising impedance.

This article deals with fixing the first of those issues for use on HF and as high as easily achieved. 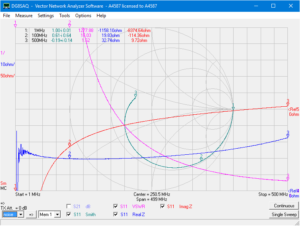 Above is a plot of input impedance from 1 to 500MHz.Input VSWR is extreme at low frequencies, and eventually reduces to less than 2 above 400MHz.

At this point, it is a piece of Chinese junk, and the seller claims that I can’t be right, they have sold thousands of them… and I know that this is not the only seller. After purchase, the seller has directed me to www.baidu.com, very loosely, a ‘Chinese only’ Wikipeadia.

The question is whether the design that is lacking can be fixed. 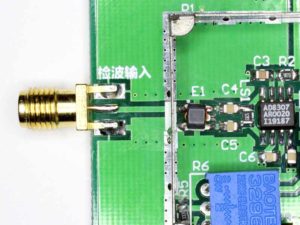 Above, the original input circuit.

First step is to get rid of the entire existing input circuit, out with the common mode choke, coupling caps and terminating resistor (save the resistor if you can). 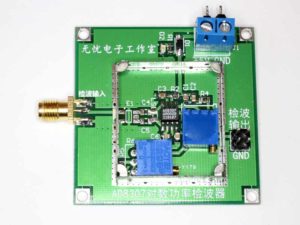 Above, the input circuit cleaned off. Remove the middle right hand pad under the choke E1, but leave the via alone.

There is no need for a common mode choke, the AD8307 does not suggest that the chip ‘requires’ balanced input, several application circuits in the datasheet and lots of successful implementations drive only one input pin.

The new input circuit has the 50Ω load on the input side of the coupling capacitors so that at very low frequencies, the termination is good even if the module has reduced response. The input termination will be a 52.3Ω 1% resistor (on-hand), that is plenty accurate enough in the scheme of things.

The load on the coupling caps is now 1150Ω, so lets calculate a value for a break point well below 1MHz. 1µF for C4 and C5 gives a lower 3dB break point of 290kHz, select 1µF. 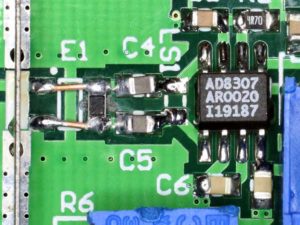 Above is a pic of the revised input circuit. The common mode choke E1 is replaced with a pair of wires, a 52R3 resistor is connected across the input path, and C4 and C5 are replaced with 1µF caps.

Much has been written about equalising the input circuit to AD8307s to 500MHz, but with some fiddling, and it really should be part of the original PCB layout rather than grafted on. The modifications here are to make it usable on HF, and as high as the simple rework allows. 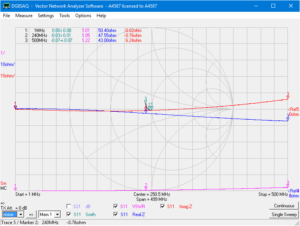 Above is a sweep of the modified input circuit from 1-500MHz. Input VSWR is 1.05 or better below 240MHz, and VSWR is much better at all frequencies than the original implementation.

So, the input Z is controlled, we can move on an calibrate the module and observe its frequency response etc, something for the next chapter.