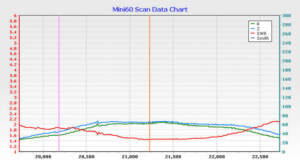 Above, the captured VSWR(50) sweep.

With very careful work, I have extracted some key points:

Note that although this example uses an antenna analyser, we are only using three points from the VSWR curve and the above data points could be captured with an ordinary VSWR meter. 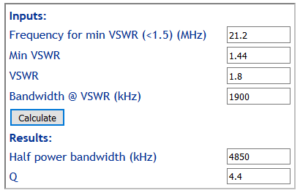 Above, the calculated Q is 4.4, which is very low for a half wave dipole system and indicates a fault.

The source VSWR sweep was rather poor, it was relatively flat and bumpy and small scale so difficult to read directly and was digitised to get better reading accuracy.

Though reading issues and the class of instrument give rise to larger uncertainty, the indicated Q falls so far short of the 10-13 range that is typical of good half wave wire dipole antenna systems that it is very likely that the system is faulty and bears more detailed investigation.