This article explores the loss that may be encountered in an ATU in a practical setting.

The load is a G5RV with tuned feeders operating at 3.6MHz. The tuned feeder is 9m of open wire line of characteristic impedance 450Ω, and the impedance seen by the ATU is around 40-j150Ω, this is not a particularly onerous load.

The ATU used for the tests is the very popular MFJ-949E, in fact MFJ claim more Hams use MFJ-949s than any other antenna tuner in the world.he ATU is rated at 300W, but there is no standard meaning or method for rating or testing ATUs to specification. All observations were made with the top cover removed, which will reduce internal operating temperatures and slightly alter settings for a given load.

The ATU ‘matches up’ with settings of 88pF, 8.3µH and 170pF. Inductor Q has previously been measured at 170 at this inductor tap and frequency, so loss in the inductor can be estimated. 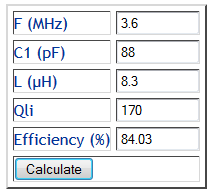 Above, the results of the T Match efficiency estimator which assumes the capacitors lossless, not a bad assumption in this case where good quality air spaced capacitors are used.

So, of the 60W transmitter output used for the test, we expect 16% or 9.6W will be converted to heat in the inductor.

Above is a thermal image of the inductor after 5 minutes at 60W input power to the ATU. Note that only the top five turns of the inductor are active in the ‘E’ switch position used. The thermoplastic coil supports have increased from 20° to 50° and the test was terminated at that time to protect the coil supports from damage. The coil supports are probably polystyrene, and though the glass transition temperature of polystyrene is 100°, the spot temperature may be higher than indicated and it may not be safe to run this power level for very long, especially at elevated ambient temperature.

Though the ATU is rated for 300W, it is most unlikely that the inductor would withstand that power level under these conditions for very long at all, less likely with the lid installed (there are no vents in this ATU case). 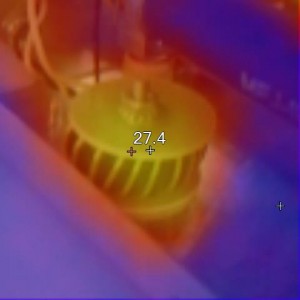 The other significantly lossy element in this ATU is the internal 4:1 Ruthroff (voltage) balun. Above is a thermal image of the balun after 5 minutes of 60W ATU input, balun input power closer to 50W due to the matching network loss mentioned above. The temperature had not stabilised when the test was terminated (to protect the inductor), but rise of 7° above 20° ambient is not large, and the loss in the balun is estimated from previous characterisation to be 14% under these load conditions, so about 7W dissipation. It will get quite hot at 300W ATU input which under these conditions would mean 35W of dissipation in the quite small balun (though high temperature material are used in its construction).

The saving grace in practical use of these things is that the duty cycle is not 100%, usually well less, and some types of modulation have quite low ratio of AveragePower to PeakEnvelopePower (PEP) (eg unprocessed SSB telephony is around 3%, processed SSB telephony is around 10%), so average power dissipation is reduced (though the ATU must still withstand the instantaneous peak voltages). Use of RTTY, AM, CW, and most of the so-called ‘digital modes’ have higher  AveragePower to PeakEnvelopePower ratio and dissipation will be high if high PEP is used.

In any event, it is prudent to monitor temperature rise within the ATU. Most incidents of damage to these things is improvised antennas on lower bands.

Warning signs of low efficiency are small input capacitance values and low inductor values relative to the band in use.