This article documents modification of my MFJ-949E to reduce the risk of damage under some operating conditions.

If the objective is to keep exit air well below the glass transition point for polystyrene, at 40° ambient, a 40° rise can be accommodated. 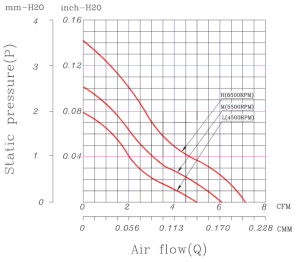 Above, the performance curves for the Ceramica 40x10mm M model fan. (After poor experience with hubs splitting on some Ceramica 120mm fans in continuous application, I have reservations using these in other than light duty.)

The fan provides a substantial capacity to remove heat from the ATU. 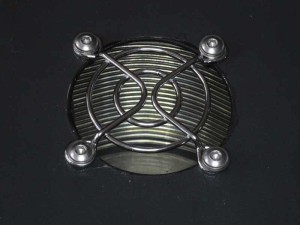 Above, a 38mm hole was cut over the centre of the coil, and a 40mm fan finger guard used to protect the hole.

The run on timer is digital, it uses a STC15F104E microcontroller and a few other components. 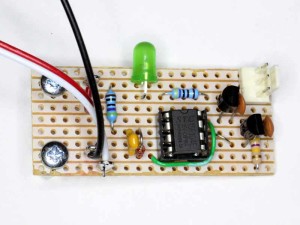 Above, the ROT constructed on a small peice of Veroboard. Since this is a development prototype, the chip is socketed and an LED is provided. The fan connector is top right. 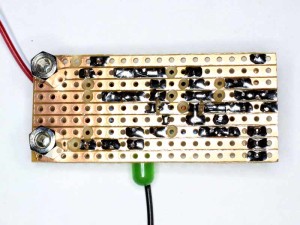 Above is the underside of the board. The two pillars at left are used to mount the board to the lip of the chassis. 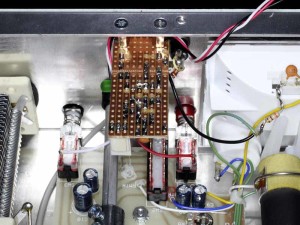 Above, the board mounted to the chassis lip clear of the high RF intensity parts. The input signal and +12V are obtained from top lugs on SW1 and SW3, and the ground connection from the meter lamp wire (as well as via the right hand pillar). The fan wires must be routed clear of the dummy load resistor.

I am very guarded about housing digital logic inside an ATU because of the prospect of noise. To mitigate the noise risk, this processor uses an internal RC oscillator, the oscillator is divided down by 128 to produce a system clock at 43kHz, the timer clock is further divided to 3.6kHz, the processor is put into idle mode where most of the logic is disabled for most of the time, all inputs and outputs are RF filtered.

No noise due to the microcontroller has been observed on any HF bands.

The run on timer uses EEPROM to store configuration parameters, the third byte of EEPROM is the timer duration in increments of 15s.

After a trial run of 100W into the dummy load for 500s and observation of the following cool down, a run on time of 900s (15min) was chosen for this application.

The circuit triggered on less than 5W input, at lower inputs supplementary cooling is not needed. 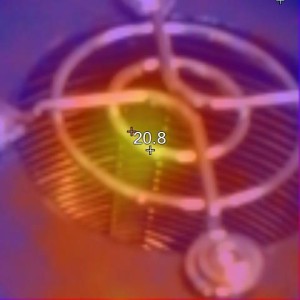 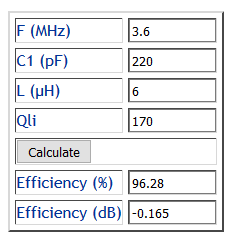 Efficency is roughly estimated above to be 96%, so around 4W of heat generated in the ATU. Insertion Loss was measured at 5W.

The PEP meter in this ATU is a fraud, and principally because less than a dollar’s worth of parts are omitted from the build. 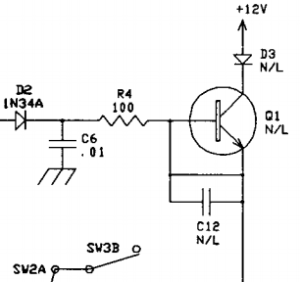 The parts shown above with designation N/L are ‘Not Loaded’, they are left out and the bridge across C12 installed. Installing these components makes the world of difference to the performance of the PEP meter function and is worth doing… but it is difficult to fit the parts post build (it is probably $70 worth of work caused by MFJ saving cents on the build).

The downside of installing the parts is that the ATU needs 12V to run the PEP meter function… but it works properly and it is arguable that there is any benefit in the crippled PEP meter function shipped from the factory.

The fan included in this modification also requires 12V, but it is little inconvenience as the ATU is always used with 12V to run the meter lamps (replaced with a white LED), PEP metering and now the cooling.

A ‘TUNE’ switch has previously been added for activation of a TuneMate tuning accessory for Icom transceivers.

The cooling solution works very well. Because the programming tools for the STC chips work so poorly, and the lack of documentation of their protocol, there is no simple way to update only the calibration data in EEPROM. I have ported the algorithm to an ATTINY25 which doesn’t cost a lot more but has a much better development environment and a range of tools to allow EEPROM update without overwriting the FLASH image, and as well it will run my ATB bootloader if desired. 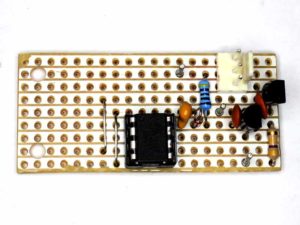 Above, the ATTINY25 implementation. 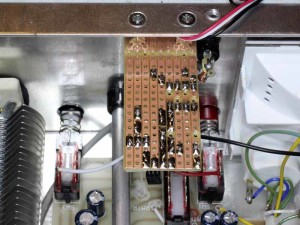 Above, the ATTINY25 ROT fitted similarly to the previous implementation.