The model is sensitive to all these parameters.

One turn in free space

Feed point impedance of an untuned single turn loop in free space is 0.0063+j118Ω, from which we deduce Rrfs is 6.3mΩ and apparent inductance is 2.6µH. 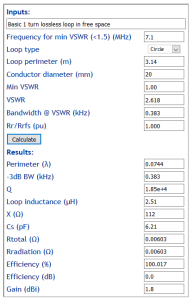 Above is a calculation using Calculate small transmitting loop gain from bandwidth measurement.

Feed point impedance of an untuned two turn loop in free space is 0.0325+j350Ω, from which we deduce Rrfs is 32.5mΩ and apparent inductance is 7.8µH.

Comparing to the single turn loop, Rrfs has increased by a factor of 5.2 times, and apparent inductance by 3.0 times.

Assuming uniform current, you might expect radiation resistance to increase by exactly 4 times due to doubling the length of conductor that carries current, but the uniform current assumption is not valid

Was there negligible flux leakage between turns, the inductance well below the self resonant frequency might be expected to increase by a factor of exactly 4.0 times, but both of those assumptions are invalid.

So, back of the envelope thinking, or extrapolation from calculators intended for single turn STL is not good enough.

The radiation efficiency of the tuned single turn loop near ground is 5.2% and its half power bandwidth is 7kHz.

The radiation efficiency of the tuned two turn loop near ground is 7.6%  (1.6dB better than the single turn) and its half power bandwidth is also 7kHz.

The two turn loop could probably not be tuned an octave higher to 14MHz, is self resonant frequency was very close to 14MHz and it probably is not practical to tune it to the 20m band. As such, it is a physically small loop with restricted multi-band capability.