This article describes a work around  that makes the thing usable (IMHO).

The torch has five modes. The description claims mode memory, but it seems that merely means that every time it is switched on, it advances one mode from last time. The lack of effective mode memory makes for very poor usability.

It appears it is possible to defeat this process by padding a capacitor with a resistor so that it loses its memory in a couple of seconds and defaults to turn on reliably in high intensity mode, from which base one can click it down to the other modes (med, low, flash, SOS).

For those who are experienced in SM rework, here is what I did. 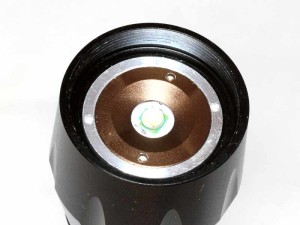 Unscrew the lens to expose the front assembly above.

Secure the body of the torch and using a pin wrench in the holes above in the silver ring, unscrew the front assembly.

Slide the zoom ring off the front assembly.

Gently prize the driver board from the back end of the front assembly. 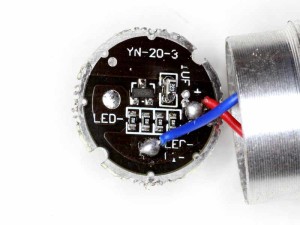 Carefully solder a 100k resistor piggybacked onto the only capacitor on the board. You can see the resistor in the top right of the pic above, (initially I tried 22k hence the 223 marking but was replaced with 100k).

If you are competent with this rework, you will know that excessive heat will unsolder the cap and all, and you will probably destroy it or just lose it. To the competent, this is a really simple operation.

Now gently press the driver board back into the rebate in the front assembly, making sure it is secure.

Reverse the disassembly procedure, cleaning the LED and lens, and test your handiwork.

This mod makes the unusable torch usable, though not good.

My warranty: if you break it, you get to keep both parts.

Update 12/3/16… 22k may be too small a value. After a week or two of use, the torch often requires very short taps of the key to change mode… impractically short. I will try 100k in a few days and see how it times… it is good!

Having worked out how to modify these so they are useful, I bought another bare torch (no point buying batteries and charger to don’t make the grade).

Lo and behold, it works just like my modified one. I couldn’t help myself, I had to see what was different. 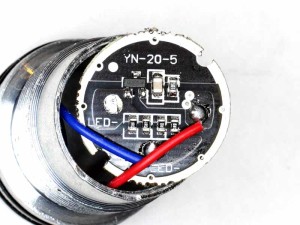 Above is the newer controller… and look at that, a 105 (1MΩ resistor across that cap, and it takes about 10s to forget its setting, and starts back at full brightness.