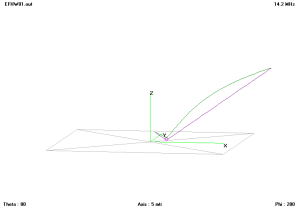 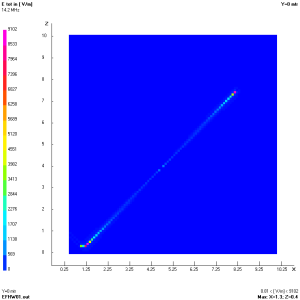 Above is a plot of E field distribution, and it can be seen that the hot spots are near the current minima, the one nearest the operator deserves further investigation. 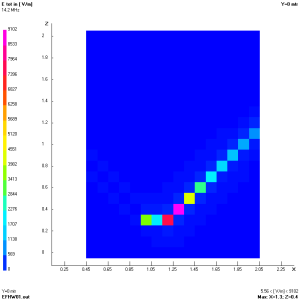 Above is a closer look at the operator end of the system. E field is very high, around 3500V/m peak (2500V/m rms) towards the lower end.

The model value at 1W RF input is well in excess of the permitted instantaneous exposure and some 40dB greater than the time averaged limit.

Different limits may be prescribed in different jurisdictions.

This study is a very simple one and there are a host of issues about extension of the model to the diversity of real operating scenarios, but it sounds a warning that EMR safety of this type of configuration is a potential problem even at 1W radiated power and warrants measurement of some typical deployments with an E field probe.