Insertion VSWR is NOT a critical parameter for this application nor this design, any impedance transformation caused by the balun is incidental to that of the antenna system and dealt with by the ATU. If you need low Insertion VSWR, do not build this design (see the coax variation below). 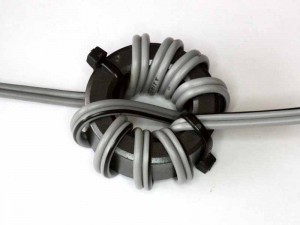 Above, the balun consist of 9t of Jaycar WB1702 speaker cable on a LO1238 ferrite core. Cost of wire and cores for two baluns is about $5. The W1JR crossover configuration is used to conveniently locate input and output connections on opposite sides.

The wire was tested on a HiPot tester, and withstood 7kVpk (the maximum available) from one conductor to a knife edge, so conductor to conductor should be well in excess of 14kVpk.

The common mode impedance is the most important indicator of the performance of a 1:1 current balun, and building or buying one without that information is uninformed buying. 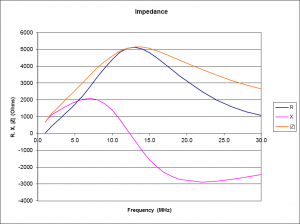 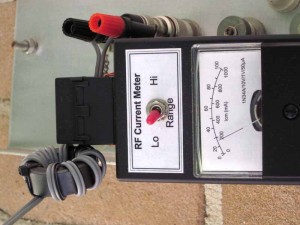 Above is measurement of Icm using a clamp on RF ammeter around both wires on the input side of the prototype balun, the wires from the lower side of the balun are attached to the tuned open wire feeder on my G5RV. Measurement is being made on 80m with 100W of tx output, in this installation 80m is the worst case for Icm.

The maximum current on the intentional radiator is 3.2A, the common mode current near the transceiver is 27mA, less than 1.0% of the maximum radiator current, a good result for this antenna system type.

Note that common mode current is usually a standing wave, and needs assessment at various locations on the feed line, and of course the standing wave pattern will vary from band to band. In the example above, it has been established that measurement at the point used is approximately the maximum on 80m.

Incidentally, the current in each of the wires stand alone is 3.5A, to close to be able to differentiate with the meter, and since the common mode current is 27mA, the currents in the two wires are almost equal in magnitude but opposite in direction, ie they are well balanced. (Note that measuring the magnitude alone does not prove balance, a common mistake.) 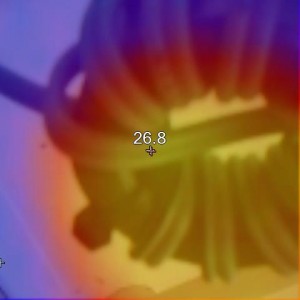 Above a thermal image of the balun after 5 minutes of steady 100W carrier at 80m on my G5RV with tuned feeders. It was 20° before the test, so 7° rise in free air is quite low. (Note that the visual and thermal images are a little displaced, the highest termperature point is actually on the core.) This is inexpensive 70° wire, that needs to be respected.

The worst case Transmission Loss with a 50+j0Ω load was 0.15dB. Though this is not very good transmission line, there is only 400mm of it in the balun.

Something for ‘makers’ who understand the value of current baluns. Wire and cores for 2 baluns are about $5 from Jaycar.

The coax version has lower insertion VSWR which is important for a ‘flat line’ configuration, where an ATU is used, low insertion VSWR is not a priority.

For 9t, the impedance plot will be the same as given earlier. 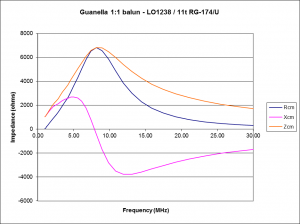 Above is a model for 11t with slightly increased self capacitance. It can be seen that it improves Zcm at lower frequencies, but at the expense of Zcm at higher frequencies.

Any ‘design’ without a measured or validated model of common mode impedance is not a very complete design… hardly a design at all.