Above is a simulation of the T network in RFSim99, component values are adjusted for a match and inductor Q is calibrated to the measured loss of 1.4dB. 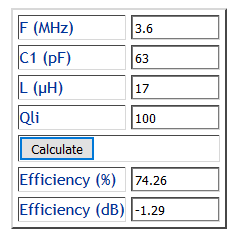 Above is an estimate from T Match efficiency estimator using the values from the simulator, but which also reconcile with previous calibration of the ATU controls. This calculator is a simple approximation and is not as accurate as RFSim99, however it is within a tenth of a dB. The measured and simulated values confirm that approach taken by the T Match efficiency estimator . 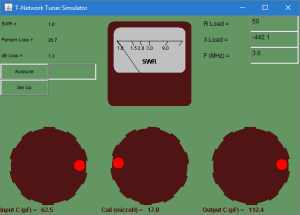 Above is a screenshot from W9CF’s tuner applet adjusted for zero capacitor loss, Ql=100, and matched for the B switch setting of 17µH. Again the loss reconciles within a tenth of a dB.

A similar test was done without the 100pF capacitor, ie for a purely resistive load of 50Ω and the measured efficiency was 0.6dB, so the effect of the series  capacitive reactance was to reduce efficiency a further 0.8dB (17%).

All of these methods can be used to estimate the efficiency of an ATU on a given load. 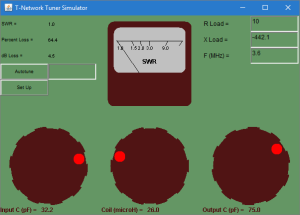 Above is the W9CF simulator with a load of 10Ω with 100pF in series. It doesn’t quite tune using the 17µH B setting, so needs the 26µH A setting. Manually tuning the capacitors for perfect match, the efficiency is -4.5dB (35.6%). With the ATU dissipating 65% of the input power under these conditions, you can understand why hams damage them.

Have a look at A look at internal losses in a typical ATU for thermographs of the internal heating of a MFJ-949E under quite good efficiency. 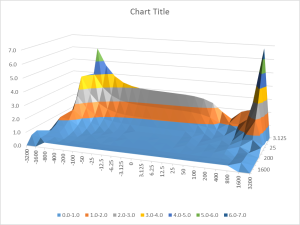 Above is a simulation of a similar ATU on 80m, the worst losses commonly encountered are with low R or low X (meaning large negative values) or worse, both. The graph shows how inadequate a pure R load analysis is as it is just a slice through the X=0 plane from this graph.

Another perspective is to consider the variation in loss with feed line length for a given VSWR. 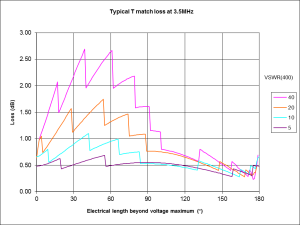 The above chart shows that the location of the ATU on the standing wave can make a large difference. The extreme values of VSWR are often encountered in multiband antenna systems with ‘tuned feeders’. The jagged lines illustrate the compromise of a switched inductor, but that does not damn the very popular roller inductors which tend to have lower Q and therefore lower efficiency.