Readers may have seen the Elitech RC-4 logging thermometer in some of my articles, and data for many articles was collected using it. 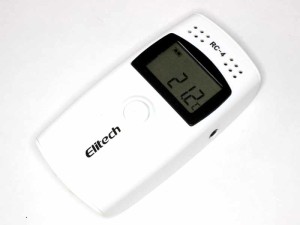 It came also which an external sensor which has been very useful in many of my experiments.

Though the supplied Windows software is ‘Chinese grade’, it has worked sufficiently well and the basic functionality has been quite good.

An immediate concern was whether it used as Prolific USB-RS232 chip, and that would probably cause Windows compatibility problems quick smart. Fortunately it uses a CP210x chip which has not been mired like Prolific and FTDI chips. 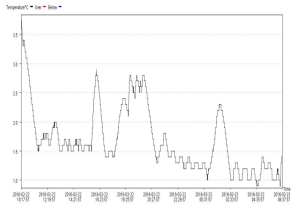 Above is a recent chart monitoring the temperature inside my refrigerator to assist in correct setting of the thermostat so that it is as cold as possible without risking freezing of lettuce etc overnight. It can be seen from the chart that a spot temperature measurement is not nearly as useful as the time log.

However, the ‘Chinese grade’ software is a casualty of Windows 10. When the software starts uploading data and attempts to plot the data, it corrupts the Windows screen and in short time causes a Windows Kernel Error and reboots. Hints there that it’s attempt at drawing the plot writes direct to hardware memory, perhaps using a Windows handle as a direct unlocked memory address (a trap for kids in the kitchen).

I have found that v2 of their software runs ok on my legacy XP notebook, though its projected life is short.

So, much as the hardware seems quite ok and it has worked enough prior to the Windows 10 upgrade, the Achilles heel is the software and it limits future use of the logger.

An email to the Chinese manufacturer about the problems has gone unacknowledged, no surprises there.

The device’s utility has convinced me of the value of access to something like this, but obviously one that works properly in Windows 10… and sadly this is not that.

Update 26/02/2016: I tried the latest software on my Windows 10 64bit laptop and it appears to work although it fails on the 32bit machine. More after some trial.