Roberts gives the VSWR=2 bandwidth as 5.4kHz, which if we assume that it was adjusted for a perfect match mid band, we can calculate the half power bandwidth and eventually, efficiency.

Assuming that radiation resistance is that of an antenna in free space let us calculate efficiency. 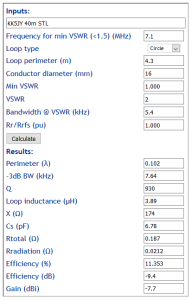 Above are the results from Calculate small transmitting loop gain from bandwidth measurement.

Separately, the RF resistance of the 16mm copper loop conductor is found to be 0.060Ω, Rr is assumed to be 0.021Ω, and bandwidth indicates that Rtotal is 0.187Ω leaving a deficit of 0.106Ω for capacitor loss and ground loss.

Efficiency is calculated as 11.4%, and given some uncertainty in Rr in proximity of ground, we might expect that efficiency might actually be somewhere between 6 and 18%.

Gain is calculated at -7.7dB, and again we might expect around 3dB of uncertainty due to the estimate of Rr. A half wave dipole at modest height is a considerably larger antenna system, but could be expected to have gain around 7dBi, about 15dB higher (factors include pattern shape change, lower ground loss, lower structure loss).