Second part in the series…

When baluns are used with open wire feed lines to wire antennas on HF, most commonly the main purpose is to suppress common mode current, to ensure that the current in one wire of the feed line is equal but opposite in direction to the other wire at that point.

For a Guanella 1:1 balun, high common mode impedance (Zcm) is a good measure of the balun’s characteristic, and it can be used in models to evaluate behaviour of the balun in an antenna system. Note that Zcm is a complex number (it has R and X parts) though in ham literature it is often treated like it was a scalar quantity.

The core used is a Neosid 28-053-31, with 11 turns wound in the W1JR cross over configuration (which allows the input and output to be on opposite sides of the toroid).

The core is a medium-large toroid of F14 material, a nickel-zinc ferrite with initial permeability of 220, it is quite suited to this type of balun and has a relatively high curie temperature (270°) and high resistivity. It is similar to Fair-Rite #52 mix. 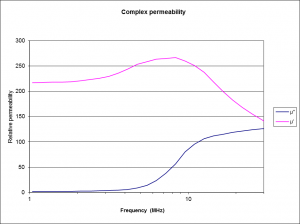 Above is a chart of the complex permeability of F14 material. 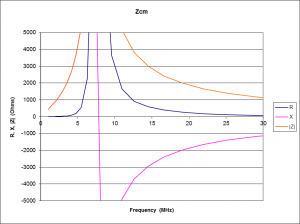 Above is a plot of Zcm from a model (model description previously published on VK1OD.net) which has been calibrated from measurement of the prototype. Note that the frequency of self resonance is very dependent on the self capacitance, and housing the balun in a conductive box will lower that frequency and is not advised.  It is rare to see this information published either for designs or commercial products, though a few publish the |Z| plot.

Transmission loss at 30MHz was measured at less than 0.2dB witha 50Ω load.