The accepted industry meaning of G/T is that set out in (ITU-R 2000) which effectively defines G/T as the ratio of the antenna power gain to system noise temperature (G/T).

G0KSC appears to paraphrase DK7ZB, these exact words don’t appear to be on his page when it was fetched:

DK7ZB presents a case on his 50MHz Yagi page that Yagis with reduced side lobes are not needed for this band with the reason given being that G/T – Gain over Temperature a mean opinion score for the measurement VHF Yagis ability to receive weak signals – makes no difference to the antennas performance on the bases that the reduction of side lobes makes no significant improvement to the G/T of Yagis on 50MHz.

G0KSC then goes on to criticise DK7ZB’s use of the term G/T and clarify its meaning:

The first point of note requires an understanding of G/T and what the temperature measurement is that is described in this passage by DK7ZB. Temperature refers to Sky Temperature which is measured in degrees Kelvin.

Well, neither usage is consistent with the ITU-R reference given above. The T term is the system noise temperature which includes both internal noise and external noise.

The ‘experts’ seem to have accepted Edwards’ appropriation of G/T to have a meaning to suit his own purposes (Edwards 2013). (Duffy 2014) discussed several failings of Edward’s purported G/T statistic. (I note that (Edwards 2015) does not publish his bogus G/T statistic for 50MHz antennas, stating although there is no advantage to low sidelobe and F/R antennas based on sky noise and ground noise… .)

Some key points regarding G/T:

The allocation of a bogus value of G/T to an antenna design based on a simulation scenario and in isolation of its deployment environment to imply rank of antenna systems in the real world is a folly, a little knowledge is a dangerous thing indeed.

Very very few amateurs actually know quantitatively the system noise temperature for their receiving systems. They just don’t have the interest in that level of understanding, they seem to think they can read their station G/T from the antenna’s packaging.

To the substance of G0KSC’s issue, is side lobe noise significant at 50MHz (re his reference to DK7ZB’s 50MHz comments) and can an antenna design reduce that in the general case.

My article Some thoughts on noise on 6m (50MHz)… provides an analysis based on (ITU-R 2015) that suggests that whilst some users might experience a significant improvement in S/N on some specific path scenarios depending on the nature and specific distribution of noise sources to their station, it is my view that it would be very hard to justify claims of general improvement in improvement in S/N on 50MHz due to so-called ‘low noise antennas’.

I would of course defer to valid comprehensive measurement data.

So, make some measurements. Measure received noise power at different azimuth bearings, different times, different elevations if you can do that. 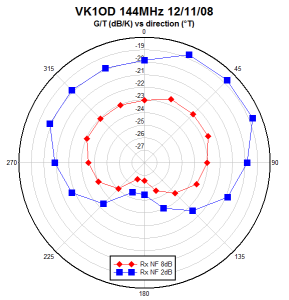 Above is an example albeit for 144MHz, to illustrate what can be done. It is a plot of G/T vs azimuth bearing for two receiver cases. As you can see, G/T depends on receiver noise and antenna pointing. It also depends on time of day, season etc.

You might expect that similar dependencies will be observed at 50MHz.