Program code has been written to collect posit records direct from APRS-IS and where the record contains a HMS timestamp (as mine do), to apply a timestamp consistent with that timestamp, and then to not write records with duplicate timestamps to the database. 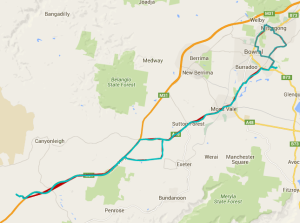 The above map has two journeys, one a loop to the north of home to Mittagong, and another SW to Marulan and back. The Marulan trip extended to 40km from the prominent digi VK2RHR-1, and coverage in the area became poor, evidenced by the poorer APRS mapping in that region.

The map can be browsed interactively at https://owenduffy.net/map/showkmz.php?map=20160204 . The red trace is APRS VHF derived using the processing detailed below.

The cyan trace is from stand alone GPS logger above attached to the case of the TinyTrak 3+. The transmitter is 65W output to a quarter wave in the middle of the wagon roof.

On the Marulan segment, 19/157 (12%) of the raw posit records from findu had delay of more than 30s, up to 191s. up to 6km positional error over most of this trip. These duplicates were all due to the path via VK2RWG-1 and VK2KAW.

The following is an example delayed (191s) duplicate record from APRS-IS.

The following is the PERL code used to fetch posits from APRS-IS and write a SQL database with corrected  / no duplicate timestamps.

The delayed duplicates are initiated by paths with latency, causes include mute stuck open on interference on substandard digis using carrier operated squelch (most digis), iGates / TNCs with flow control problems (eg some Kantronics), defective iGate software that slightly modifies some packets (eg aprsd)). APRS is designed to detect and discard duplicates within a 30s window… but clearly that window is not sufficient.

Whilst it is possible to identify likely causes of degraded APRS network performance, it is naive in the extreme to think that would lead to a fix. Most of the network is not monitored, it is not maintained, there is no coordination network of players in the APRS network. A possible solution to make a ill-conceived architecture and poor implementation work better is to build the core infrastructure more intelligently to discard corrupted and stale records. Further improvement could be achieved by filtering out traffic that has passed through identified corrupting digis and iGates to clean the traffic and possibly encourage rectification by owners of problems that are long-standing.

There is the information in posits that use HMS timestamps to apply a correct time within a 24h window. Clearly, the designer of APRS to have DHM or HMS or none didn’t regard it worthwhile to provide a more unambiguous timestamp, broadly the APRS core washed its hands of a time dimension on posit reports.

In this part of the world, APRS VHF digi coverage is reducing, a harbinger perhaps of demise of APRS VHF, further reason to use a stand along NMEA logger to document journeys if that is desired. Another option is discussed at The future of APRS is here….