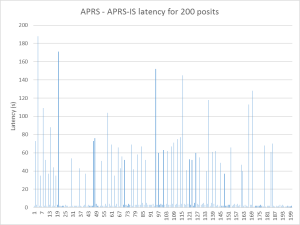 Above is a chart of the difference between APRS archive timstamp and the GPS timestamp. A very large number of posits takes more than a couple of seconds to reach the APRS-IS archives. 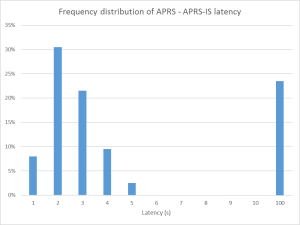 The frequency distribution above shows that just 39% of posits take less than 3s to reach the findu APRS-IS archives, and a staggering 24% take more than 10s (and there are 5% greater than 100s).

By reprocessing the data to correct the APRS-IS arhive time using the GPS timestamp, it is found that there are only 146 unique posits, 54 or 27% are duplicates, and most of the long delayed posits are position reports which falsely map the rover at a location that it left often many minutes ago, and so the track hops backwards and forwards over the true track. 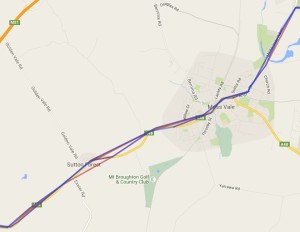 Above is an illustration of the mapping error caused. There are two transparent tracks shown, the light red track is the raw APRS-IS track, and the light blue track is using the reprocessed data with duplicates removed as described. The purple colour is where they are coincident (as they should be), where you see light blue or light red it is the result of APRS – APRS-IS – archive corruption of track data. The light blue track (and purple) is the correct track, and it has only 146 unique points against the red track which is 200 points, including 54 duplicate positions with inserted out of order due to delayed time stamps.

Above is a comparison of the raw APRS-IS track in red, reprocessed APRS track in blue (and purple), and the cyan track is from a data logger capturing the GPS NMEA output.

You can browse an interactive zoomable map of the three tracks.

You might ask why the APRS-IS wider network does not use the HHMMSS timestamp where it is provided in a posit record, and why it then doesn’t use the unique key to delete duplicate submissions.