I had occasion to make a trip to Canberra for a few days this week.

It presented as a good opportunity to explore APRS by VHF radio and the stand alone GPS logger above attached to the case of the TinyTrak 3+. The transmitter is 65W output to a quarter wave in the middle of the wagon roof.

Over the three days, the extract from findu was 6240 APRS records (the vehicle was in a covered car park by night), and 389693 NMEA records (~20MB) logged to the logger, from which 6150 track records were extracted using GPSBABEL for track simplification. Both track sources were converted to kml files. 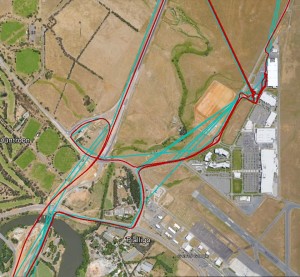 Above is a screen shot comparing the track around Majura park for GPS logger in red and APRS in cyan. There are several instances of false double backs on the APRS track (a problem inherent to APRS and quite common), and very coarse track despite being less than 8km from the prominent digi on Black Mountain, and very good view of the digi on Mt Ginini.

The whole trip can be viewed on an interactive zoomable map at https://owenduffy.net/map/showkmz.php?map=20160111 . 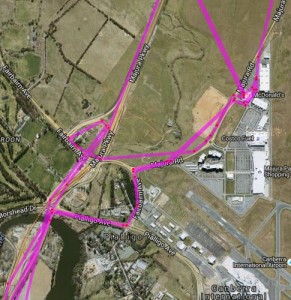 Above is a screenshot from aprs.fi. It is entirely APRS based, and it does some filtering to remove garbage. The track is pretty coarse. 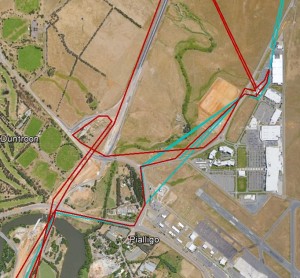 Above is a comparison in the same area of the raw APRS track in cyan with a filtered track in red, see APRS – APRS-IS latency for discussion of the filtering.

Overall, the APRS track, though real time, has significant record gaps, and has nowhere near the detail of the direct logger.

Understandably, APRS is a dying technology. One of the two nearby digis went QRT silently months ago, and would appear to have ceased operation permanently.