A correspondent has suggested to me that my practice of giving Return Loss as a positive dB value is wrong, citing US FS-1037C.

US FS-1037C has been superseded by ANS T1.523-2001, Telecom Glossary 2000, and the wording in the latter is identical to the former, so let’s discuss the more current document.

The definition is internally inconsistent.

ANS T1.523-2001, Telecom Glossary 2000 contains several errors and is internally inconsistent so it is not a credible reference for the purpose of defining Return Loss.

Return Loss expressed in dB wrt a real reference impedance will usually be a positive number in passive networks.

The article Can the magnitude of the complex reflection coefficient (ρ) be greater than 1 used an unusual example where Return Loss would indeed be negative. 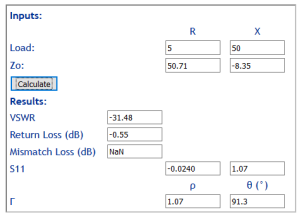 For most practical cases at HF and above, and ALL cases where Zo is real above, ρ will be less than unity, and Return Loss positive.