Note that the use of capital E implies the magnitude of voltage, so Emax/Emin must always be a positive number. 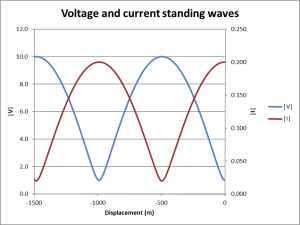 The standing wave is observable, the expression VSWR=Emax/Emin seems straight forward enough. The voltage along the line could be sampled and VSWR determined, seems all very practical.

VSWR is often expressed in terms of ρ, the magnitude of the complex reflection coefficient Γ. 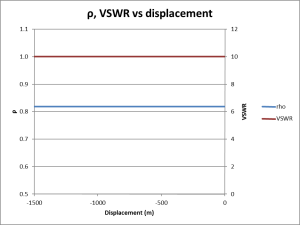 Above is a plot of ρ and VSWR for the example, ρ and VSWR are both uniform along the line, and VSWR reconciles with (1+ρ)/(1-ρ).

This is the world of lossless lines, the world of most text books, but it is not the real world. The real world introduces some complications that make these simple definitions less adequate.

The line parameters are similar to RG58A/U, the characteristics of a line of that size will be very similar. 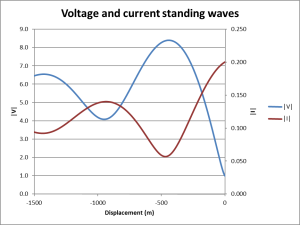 Above is the voltage and current distribution on the lossy line.

ρ is a property of a point on the line, and so we can calculate a ‘virtual’ VSWR at a point from ρ at that point. 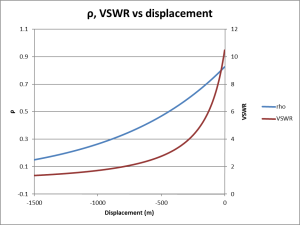 The above plot shows the variation in ρ due to mismatch and line loss.

That all seems pretty sane, a possible solution, but is it?

Let’s look at an interesting example that gives rise to ρ>1. 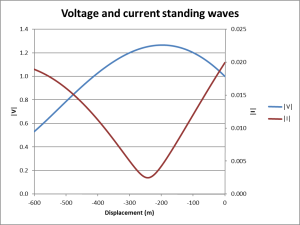 Above is the voltage and current standing wave distribution, focussing on the 300m nearest to the load. It might not be obvious from the chart, but the VSWR cannot be determined by direct measurement of Emax and Emin for the same reasons as in the last case… so we hope to again calculate VSWR from ρ. 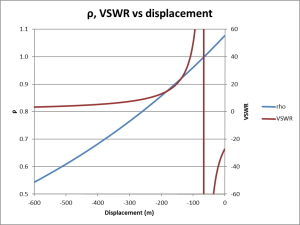 Above, the plot of ρ which passes through 1.0 and VSWR(ρ) is singular at that point, it is undefined at that point. For ρ>1.0, VSWR(ρ) using the traditional formula given above will be negative… which is in conflict with the definition as Emax/Emin being a positive number.

One could change VSWR(ρ) to always produce a positive number, but it is probably better to allow the negative result as the function has a simple inverse, ie ρ=(VSWR-1)/(VSWR+1).

The common notion that ‘forward power’=Vf^2/Zo and ‘reflected power’=(ρ*Vf)^2/Zo where Zo is assumed to be purely real is an approximation that is invalid when Xo≠0 as in the lossy line cases above. Any argument about conservation of energy based invalid assumptions is itself invalid.