Having recently published Graphic demonstration of loss under standing waves, I was interested in a thread running on QRZ.com which offered solutions to some mismatched scenarios.

A far worse condition is using a 40 meter dipole on 80.  I spent my entire Novice “career” doing that…with about 100 feet of RG-58! I figured my 50 W from my Johnson Adventurer was down to about 100 mW by the time it got to the antenna.

N2EY quoting KL7A said Let’s do the math! (though it appears he wrote the wrong frequency in his post):

A more exact model of the scenario is a dipole feed point impedance around 10-j1100Ω, and actual VSWR at the load end of the RG58 would be 598, much greater than N2EY’s estimate.

Using the calculator recommended by N2EY, but with a VSWR that is more realistic. 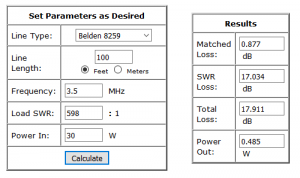 Above, the VSWR based loss calc from N2EY’s recommended calculator gives 0.485W against his working of 9W.

That calculator uses the ‘ARRL formula’ discussed at Graphic demonstration of loss under standing waves.

Lets try a more exact calculation based on the estimated load impedance.

Digging the relevant results out, transmission efficiency is 0.43%, so with 30W transmitter output power, power reaching the feed point is 129mW.

So, it turns out the KL7AJ’s suggested 100mW wasn’t far off the mark.

Why was N2EY’s calculation of 9W some 70 times or 18dB higher than the more exact calculation?

There are two obvious contributions:

A picture is worth a thousand words 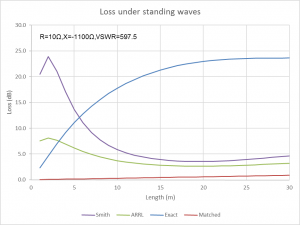 Above is a graphic comparison of the methods discussed at Graphic demonstration of loss under standing waves for a range of distances to 30m (~100′). Note that the ARRL conditions their formula as not suited to VSWR>20 which applies to the left of 15m in the above graph.