Standing waves change the distribution of voltage and current on a transmission line, and that results in a change in attenuation from that published for a matched load (ie Zl=Zo).

There are many formulas given in various places for calculating the loss under mismatch, almost all of them depend on either ρ (the magnitude of the complex reflection coefficient Γ) or VSWR. Since these are simply related (VSWR=(1+ρ)/(1-ρ)), they have the same dependency. In fact, there is not enough information in ρ (or VSWR) to calculate loss exactly, so they are approximations with underlying assumptions that are rarely exposed.

This article compares the calculation using two common formulas which related loss under mismatch with Matched Line Loss (MLL) with the exact solution using lengths of RG58 terminated with two different VSWR=10 loads at a range of frequencies from 1-30MHz.

If a waveguide is one or more wavelengths long, the average increase in dissipative loss due to standing waves in the region extending plus or minus a half wavelength from the point of observation may be expressed as a coefficient or factor of the one-way transmission loss per unit length.

Rearranging to make mismatched the subject: 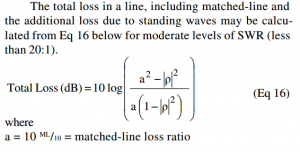 (Straw 2007) gives the formula above, with one condition stated, that it is valid for VSWR<20.

Since VSWR is more likely to be known, the expansion of Sraw’s Eq 16 in terms of VSWR is:

The formula in these terms is a lot more complicated to enter accurately into a hand calculator, spreadsheet cell, or to calculate with a slide rule.

Above is a comparison of the two approximations with the exact solution and MLL for 5m of line and Zl=500+j0Ω, VSWR=10.

Above is a comparison of the two approximations with the exact solution and MLL for 5m of line and Zl=5+j0Ω, VSWR=10. 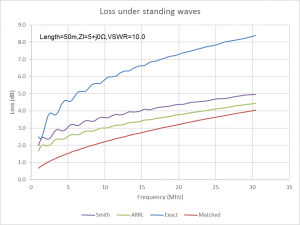 Above is a comparison of the two approximations with the exact solution and MLL for 50m of line and Zl=5+j0Ω, VSWR=10.

(Austin 2014) gives a simple analysis of his ZS6BKW antenna described at (Austin 1987), including a table of expected driving point impedances for the dipole itself and table (Table 1) of expected transmission line losses for the transformation line section. 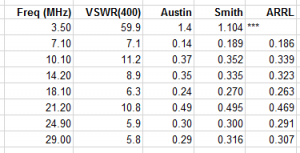 Above is a table derived from Austin’s Table 1 with the addition of loss calculations using ARRL and Smith formulas. Austin used W9CF’s line loss calculator which give the exact loss. If we ignore the3.5MHz case, the RMS error is about the same, if we included the 3.5MHz case ignoring ARRL’s VSWR restriction (yielding 0.984dB), Smith’s RMS error is about 30% of ARRL’s.

Some key points to note: