This article explores application of an antenna analyser to a helically loaded 7MHz mobile whip that has an adjustable length tip for tuning.

The task at hand is to ‘tune’ the antenna to a desired operating frequency.

The analyser used is a Rigexpert AA-600, but the article deals more generally with analyser features. 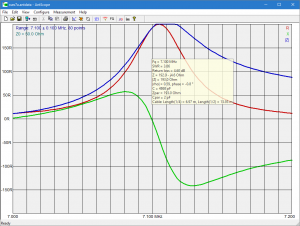 Above is a plot of R, X, and |Z| measured at the cable connector that plugs onto the transmitter. Ignore |Z|, it is irrelevant and confusing but unfortunately a ‘feature’ of the Rigexpert software that cannot be disabled.

Note the shape of the green reactance curve, it passes through X=0 at 7.100MHz and is not at all the shape that we would expect of a loaded monopole (eg opposite slope).

Many users of analysers focus on the X=0 crossing which they take as antenna resonance and the target for optimisation, ie shorten or length the antenna so that X=0 at the desired operating frequency. To a large extent, this practice is founded on some pretty woolly thinking about the merits of antenna resonance. 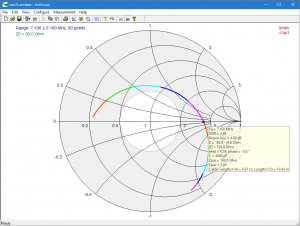 Above is a Smith chart display, which is again all wrong, it is not characteristic of a loaded monopole. Note the X=0 crossing at 7.100MHz 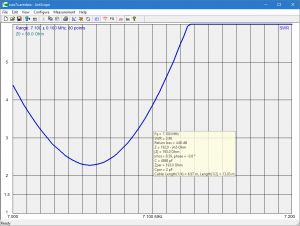 So what should we expect to see?

A loaded monopole is a fairly high Q antenna that near resonance will exhibit R that is almost independent of frequency, and X that changes fairly linearly from -ve to +ve with increasing frequency and relatively quickly.

To the experienced eye, it is patently clear that the antenna is being measured through some length of transmission line which transforms the feed point impedance.

Backing out the effect of the transmission line

Backing out the effect of the feed line in the Antscope software we get different plots. (Not all analysers or software support backing out a transmission line at all or well, but other applications such as ZPLOTS may provide useful function.) 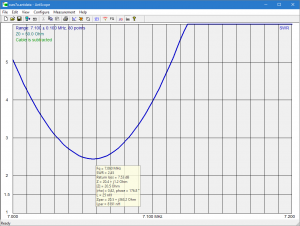 Well, mostly different, the VSWR curve is almost the same. It is actually different as accounted for by the line loss, but that is so small that the effect is not noticeable.

I should note that I do not use the line loss table that is supplied with Rigexpert as it is based on AC6LA’s tables and I prefer my own. Your results using the standard Rigexpert tables might be a little different to the results shown here. 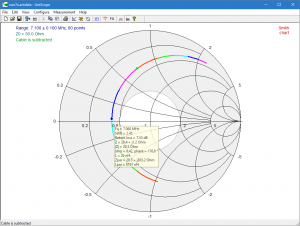 The Smith chart looks sane, the locus of Z roughly follows a constant R circle, and X varies from -ve to +ve with increasing frequency. 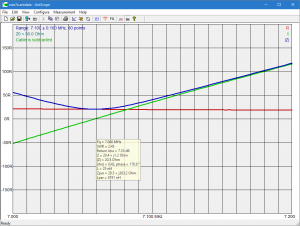 Above, R.,X in cartesian form. We again see R is fairly constant, and we can see that X is fairly linearly increasing from -ve values to +ve values. Importantly, frequency for X=0 almost exactly coincides with that for minimum VSWR.

Returning to the raw measurements made looking into the cable… 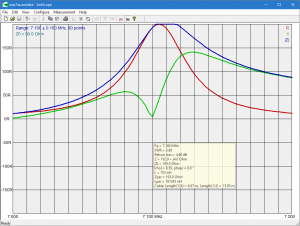 Above is the same measurement data edited to remove the sign from the reactance, and plotted. Seeing 80 points in context on the plot gives clear insight that something appears discontinuous at 7.100MHz, but you might not easily notice this on an analyser without a graphic display.

The most common ‘rule’ (RoT) advised by ‘experts’ and extolled by unwitting users is that increasing magnitude of X (|X|) with frequency  indicates inductive reactance and conversely decreasing |X| indicates capacitive reactance. 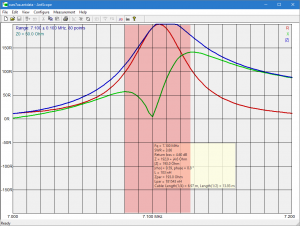 Applying this RoT, the pink shaded area above will be incorrectly signed. 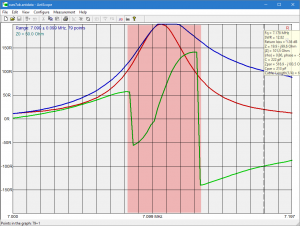 Above is the raw unsigned plot after application of the RoT.

Again, the plot of 80 points in context show two large discontinuities that would warn an alert user of some problem, but users might not notice this problem when using an analyser without a graphic display, especially if working with just a few measurement points in their head. 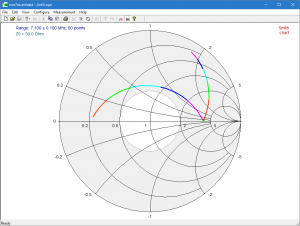 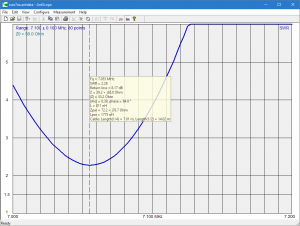 Despite all these issues with the unsigned measurements and attempts to correctly sign the data, the VSWR curve above is just fine.

Not only is the rather ordinary VSWR curve just fine, it is the best indicator for tuning of this type of antenna. The antenna should be shortened or lengthened to steer the point of minimum VSWR to the desired operating frequency, and that is true whether or not you have correctly signed reactance data.

Use the capability of the analyser that is most appropriate to the problem at hand.

Problem solving is assisted by being familiar with the thing being measured, and the instrument. Go make some measurements.