I often see posts in online fora by people struggling to make sense of measurements made with their antenna analyser.

This article is about exploitation of a modern antenna analyser beyond its capability as a self excited VSWR meter. The latter is fine, and it is often not only all you need, but the best tool in optimising some antenna systems… but if you want to exploit the other capabilities of the instrument, read on.

Great benefit can be obtained by measuring some known loads, and reconciling the measurement with the known.

A quite simple set of equipment can be used to create a scenario rich with opportunity to prove your understanding of the basics of complex impedance, transmission lines, and measurement. Lets explore a simple example. 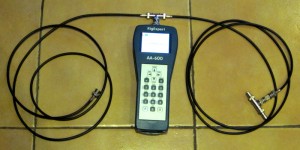 Above is a test jig. It is two equal lengths of identical coax connected to a tee piece on the analyser. The end of one piece of coax has a tee piece with two nominal 50+j0Ω loads as used on Ethernet 10base2 networks. The analyser is a Rigexpert AA-600.

This scenario is a lot like a single stub tuner, well it IS one because at one frequency, the input VSWR will be approximately 1.0 given a load of 25+j0Ω. 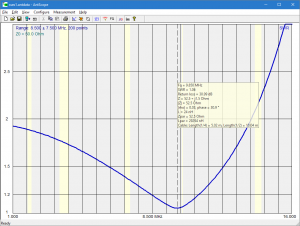 Above is a VSWR sweep from 1 to 16MHz, and a spot measurement reported at minimum VSWR. Min VSWR is not quite 1.000… nothing is perfect, not the loads nor the coax Zo and loss… but it is close enough to learn from. Indeed understanding the source and magnitude of errors is an important experiential lesson.

(There is a small defect in the Rigexpert plot, the blue line running along the upper plot area boundary is a graphing defect that appears in many amateurish ham packages.) 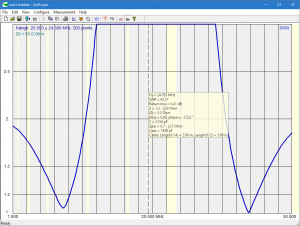 Extending the scan up to 50MHz illustrates the issue in that it shows gross error between the plotted VSWR=3.0 and the actual VSWR=42 at the cursor. The plot line is not properly windowed within the plot area boundary.

Examine the first VSWR curve, and explain to yourself why it is so, deduce the electrical length of the coax sections and their physical length for vf=0.66, do some spot calculations and see if you can get close to the values shown on the plot. 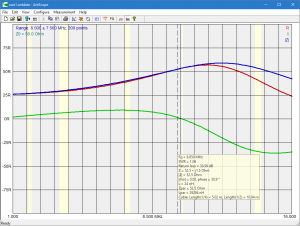 Above is a plot of R and X. It also includes |Z| which cannot be turned off, one of the shortcomings of the Rigexpert Antscope software which is probably catering to people who think of Z as a scalar quantity. |Z| belongs on a plot with phase, but not on R,X.

Again, try to estimate these values using your favourite transmission line calculator or a Smith chart. 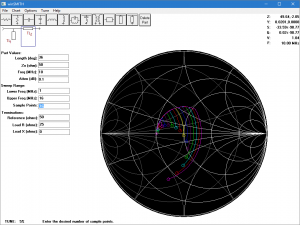 Above is a Smith chart solution every 1MHz from 1 to 16MHz. The yellow trace is 10MHz and it is those values reported in the top right corner.