Voltage Standing Wave Ratio is the ratio of the voltage maximum (antinode) to the adjacent voltage minimum (node) on a transmission line. (This assumes a fully developed standing wave, that the maximum and minimum are not forced by end of line).

Ratios are often expressed in a form that shows the relationship between two or more quantities, eg Pythagoras’ triangle could be written as a three term ratio: 3:4:5.

A two term ratio (m:n) has a value that is the real number m/n. That real number could be an irrational number (eg 10:9), and hence writing it as m:n may be a compact form.

A two term ratio (m:n) can simply be written as the decimal number representation of m/n where it is sufficiently compact.

In the case where the ratio is m:1, m is the real number representation of the ratio and where the denominator is always 1, expression as m:1 is redundant.

Most formulas written use the single real number value of the ratio, which is simply the antecedent when the consequent is 1.

My own writing style is to write the simpler real number representation, as that is what is usually plugged directly into calculations. 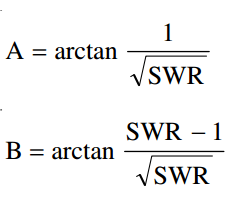 Above are some examples from the ARRL Antenna Book.

Though the ARRL Antenna Book tends to write VSWR in text out as a ratio, they sensibly use the more compact decimal real number expression when it suits, see above.

People have argued that writing VSWR in the ratio form reminds them of what it means… but then it is hard for people who write 1:2 (which is 0.5, hams are often ready to redefine well known terms) when VSWR normally has a real value greater than 1. Some of these folk need to take me to task for not writing the full ratio form at every instance but I am sure that anyone who has a basic understanding of what VSWR means and has ever plugged the value into a calculation knows that the single real value is what is almost always used.

Why write VSWR rather than SWR. That is to remind the reader that it is a voltage ratio rather than a power ratio… of course it could equally well be a current ratio but knowledgeable people will still write VSWR for that case as it is of no consequence  to the ratio and it use whether it is voltage or current. Wheras, if you measured forward and reflected power using a directional coupler, you need to calculate the forward wave and reflected wave voltages, calculate the max and min voltages, and divide them to get VSWR.