This article describes a remote ON/OFF switch which uses an RC receiver and adapter chip to convert the RC PWM signal into an ON/OFF output. (Suitable RC transmitters are on hand.)

The immediate application is for remote ON/OFF PTT or KEY of a transmitter for field strength testing at various locations.

Remote control hobbies have long used a multi channel digital proportional protocol for control of planes etc. The simplest multi channel receiver has an independent PWM output for each servo.

The PWM signal is a 1000-2000µs pulse with a repetition rate from about 50Hz up to 500Hz or so, the duration of the pulse conveys the information.

The converter chip is a ATTiny25 MCU with firmware that monitors the PWM stream and provides ON/OFF and OFF/ON output pins. For the immediate application, the ON/OFF (or non inverted) output drives a 2N7000 FET with ‘open collector’ output suited to the PTT and KEY lines of most modern transceivers.

The firmware ignores PWM signals with duration outside the range 900µs to 2100µs, and switches ON at 1600µs, and OFF at 1400µs to provide some hysteresis. If PWM input is lost for 125ms, the output will fail safe OFF. 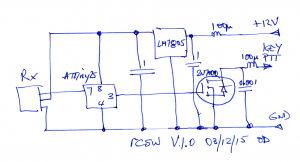 Above is the schematic. The 2N7000 is good for 60V, can handle up to 100mA without a heat sink, and had a body diode to absorb transients if the load is a relay.

The circuit incorporates RFI filtering to reduce the chance of disruption due to RF energy.

The RC receiver used is a spare inexpensive OrangeRx 4 channel 2.4GHz DSM2 compatible receiver, Ch1 is wired to the converter. There are plenty of receiver choices, diversity 2.4GHz receivers can be bought for under A$15. 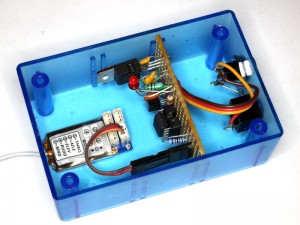 Above is the implementation in a small translucent Jiffy box which allows observation of the LED on receiver. The RC receiver at the left is wrapped in heat shrink tube and secured to the box with double sided foam tape. The rx antenna exits through a small hole in the box, but would probably work fine left inside the box. The rest of the electronics is on a small piece of veroboard cut to fit in one of the box slots.