An upcoming project calls for a stand alone GPS logger.

The requirement is for a GPS stream that allows correction using RTKLIB, but this trial is of a lesser GPS as proof of concept. 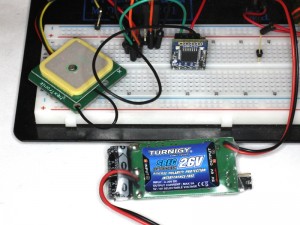 Above, the equipment consists here of a Ublox NEO-6M based GPS module (~A$15 incl on eBay) at left, an Openlogger (~A$15 incl post on eBay) at right, and a 12V-5V converter (~A$7 from Hobbyking) at bottom. The latter is a 5A converter, way overkill, but it was on hand. The GPS module has a 3V regulator on board for the NEO-6M chip.

The equipment was hooked up and walked around the front yard for a quick test with NEO-6M and LEA-6H GPS. 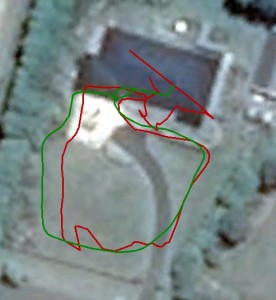 Above is the track displayed in Google Earth. The red trace is a NEO-6M, the green trace is a LEA-6H. Some of the jaggies are due to GPS error, the 6M is a low end GPS.

It is interesting that the weight of opinion amongst online experts is that the lower cost NEO-6m is just as good as the LEA-6H for UAVs alleging that they differ only in price, not my experience though and the graphic above illustrates there is a substantial difference. The LEA-6H has been upgraded to current firmware (v7.03 which supports GLONASS). 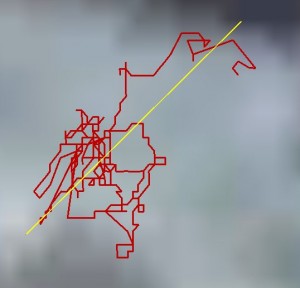 Above is a plot of positions from a stationary NEO-6M over 15min, the yellow line is 5m long to give some scale to the graphic.

The final GPS will be a Ublox LEA-6T based device which is not only more accurate, but it supports a raw data stream suited to use with RTKLIB for correction to much improved accuracy. The final logging reference station will cost about A$60, and together with the same GPS for the rover, should give cm accuracy.