(Belrose 1998) described a mobile antenna system which, to his credit, the author validated its performance by making a series of field strength measurements and calculating radiation efficiency. 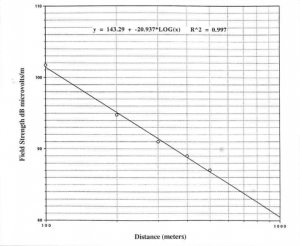 Above, Belrose gives a set of measurements of field strength at different distances, and a curve fit from which he takes a value of 101.42dBµV/m at 100m as the basis for his efficiency calculation.

If the ground was lossless and Directivity assumed to be 3, we can calculate the expected field strength at 100m from a lossless antenna. 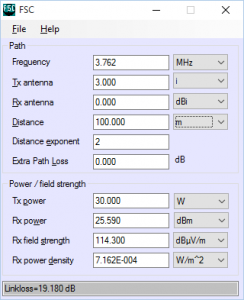 The question that arises is whether assumption of negligible ground wave attenuation is a good one. Belrose did not disclose the ground type, but using the same figures as he used for his NEC models, let us assume σ=0.010, εr=30. 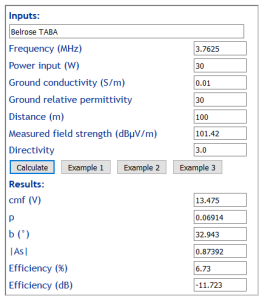 Above, a calculation of efficiency taking into account an estimate of ground attenuation using Norton’s f5 approximation. Factor |As|=0.87392 is the ground amplitude factor, -0.6dB, and worth considering. 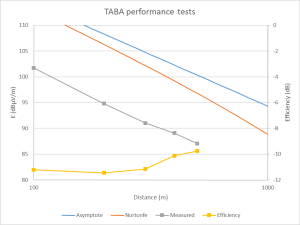 The plot above is derived from Belrose’s Figure 2 measurement points. The Asymptote line is that for lossless radiation from a 100% efficient antenna, the Nortonfe line factors ground attenuation using Norton’s ‘exact’ formula. The Efficiency line is the difference between measured and Nortonfe lines. It is interesting that Belrose’s measurements don’t seem to follow the expected ground attenuation curve. (The graph uses Norton’s ‘exact’ formula and will produce very slightly different results (~0.2dB better efficiency) to the calculator above which uses Norton’s f5 approximation.)