There are a host of design tools for Small Transmitting Loops, spreadsheets, online calculators and conventional applications you download and run on your PC.

NEC study of Small Transmitting Loop Q vs frequency contained a graph of the elements of feed point resistance from and NEC-4.2 model for a small loop. Key parameters are:

This analysis only extends up to 10MHz, because for perimeter>λ/10, the formulas used by most of these simple calculators are in error for other reasons. 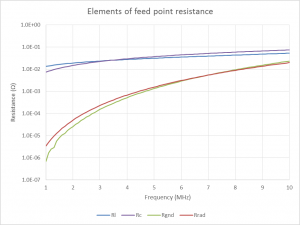 Note that in this instance, capacitor ESR Rc is always significant, and that above 3.4MHz, Rc is greater than loop resistance Rl, so ignoring Rc may result in efficiency estimates more than double the correct value.

Little wonder these antennas have such appeal!

Jennings offers the following advice on their vacuum capacitors.

Extremely low losses occur in vacuum capacitors because of the vacuum dielectric, compact construction, and the use of low loss glass or ceramic envelopes as well as copper and precious metal solder construction. Consequently, vacuum capacitors are able to handle large RF currents at high RF frequencies that would destroy other types of capacitors. The “Q” factor, or ratio of stored energy to dissipated energy, is typically in the order of 1000 or 5000 or higher.

Because Q is a function of frequency, capacity and E.S.R. (Equivalent Series Resistance), it is perhaps more meaningful to consider the value of E.S.R. In modern high power capacitor applications, E.S.R. is significant for determining cooling requirements. The slight loss results from the RF resistance in the copper. Based upon actual tests, the E.S.R. value in not effected by change in capacity, other parameters being fixed. The value of E.S.R. varies over a range of 5 to 20 milliohms from 2.5 to 30 MHz.

In a HF STL with perimeter=λ/10, Xl will be of the order of 130Ω, so Xc will be about the same, and using Jennings’ ESR=0.005 to 0.02Ω, the implied Q range at maximum capacitance would be 6500-26000 which looks pretty good, but the capacitors are not always used at 100% capacitance, and connection hardware increases ESR, decreases Q.

There are very few meaningful and credible measurement reports on well constructed loops with vacuum caps, but those that do exist raise doubt as to whether Q of the vacuum caps plus connections is more than 2000.

VK4AMZ has built a fine loop for 160m and up and described it at http://www.brisdance.com/vk4amz/LOOP.html. It is an octagon of 19mm copper tube 3.6m high (perimeter=11.93m). To his credit, he gives measured bandwidth figures for several bands, but 160m is the only band where perimeter<λ/10 so the only band where the STL assumption of uniform current is valid so this analysis on that basis is limited to 160m. 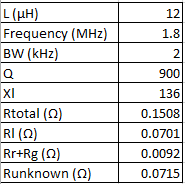 Above is a table of calculations of Rtotal (referred to the main loop), loop conductor loss Rl, and an upper limit for radiation resistance plus ground resistance Rr+Rg being twice free space Rr). Runknown is the balance of Rtotal not allocated, and it includes capacitor loss (capacitor internal ESR plus external connection resistance) and other losses which should be much smaller.

If all of the Runknown is allocated to capacitor loss, Qcap=1899. This is a lower bound for the likely range of Qcap, but other components of Runknown should be very small, so Qcap is unlikely to be higher than say 2100.