He included a table of recommended designs, the following is an extract of the table rows relating to an octagonal loop with perimeter=20′ (6.1m). The tube specified was 3/4 copper pipe which has an OD of 22mm.

Also given are his design equations: 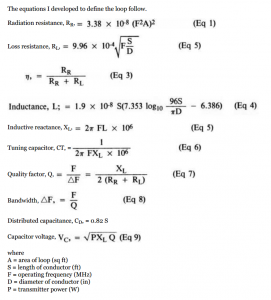 I have constructed an NEC-4.2 model of the physical structure of the 20′ perimeter octagon on 7.1MHz at 2m centre height above 0.007/17 ground, and included 0.050Ω ESR for the air spaced tuning cap shown in his article.

Attempts at reconciliation of Hart’s table, Hart’s formulas and my NEC model have not been entirely successful.

Lets go through the formulas one by one.

Hart’s formula gives Q=1353, NEC doesn’t directly calculate Q, but Q calculated from its results is 848. A large difference, Hart’s had a different meaning for Q. (See Antennas and Q for further discussion.)

There is significant difference between Harts table of recommended antennas, most notably the efficiency figure is internally inconsistent, and unrealistically large… no wonder people are excited by the claims.

Many of these formulas are in (Straw 2007) and many other ARRL Antenna Books.

The formulas have also been used in many online loop calculators and design spreadsheets, time honored, but wrong nevertheless.