Small Transmitting Loops (STL) are loops with approximately uniform current around the loop.

(King 1969) gives us expressions for an equivalent circuit of the ‘loop mode’ and ‘dipole mode’, it consists of parallel branches for each mode of series R and X:

Plotting these and the combined total Rt and Zt for a 1m diameter (perimeter p=3.14m) lossless circular loop of 20mm diameter conductor from 2-30MHz in free space gives an insight into their relative magnitudes at different frequencies. 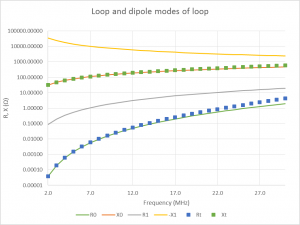 Above, it can be seen that whilst the radiation resistance of the dipole component R1 is much larger than that of the loop component R0, the series reactance component X1 is also much larger and the combination serves to limit the portion of total current that drives the dipole mode.

Above is a plot of the portion of total radiated power that drives the dipole component. It is negligible at the low end, <5% where p=λ/10 and around 30% where p=λ/3.

This characteristic is a manifestation of non-uniform loop current, and one of several that suggests that the assumption of uniform current becomes less valid for p>λ/10.

It is important to note that for a STL oriented in the vertical plane and bottom fed, that maximum loop mode radiation is vertically polarised and in the plane of the loop whereas dipole mode is maximum normal to the loop plane and horizontally polarised.

The model here is a lossless loop in free space as it simplifies the maths (staying strictly within King’s formulas), but does demonstrate the power sharing between modes. Inclusions of the effects of loss resistance to the structure losses and ground losses of real world antennas is made more difficult when current is significantly non-uniform (p>λ/10) though most ham calculators make crude approximations.

Some proponents of STL eager to seize on ‘features’ to promote the STL make claims about dipole mode, that it increases radiation resistance which significantly improves antenna radiation efficiency and fills in nulls in the loop mode pattern.

The interaction of the capacitive branch increases Rt (which is all radiation resistance in this lossless free space example), Rt is increased 116% at 30MHz.

The value of Rt for this parallel circuit cannot simply be added in series with the conductor resistance and capacitor equivalent series resistance to calculate efficiency to evaluate the lossy loop case, evaluation of the efficiency effects are probably best evaluated with a tool like NEC. An NEC model of the example loop using copper conductor in free space, and which accounts for the effects of non-uniform current distribution including dipole mode and uneven conductor loss gives efficiency of 95.0% which is a little lower than calculating efficiency from simple conductor resistance and King’s Rt (98.3%).

if you call out the null in the loop pattern as an advantage for interference rejection, then diluting the null for a larger loop or on a higher frequency seems contrary to that feature.

If one takes a stricter criteria for an STL, that p<λ/10, then as a consequence of more uniform current distribution, dipole mode is insignificant, the nulls are largely preserved.