This departure can be compensated for to some extent by addition of a small equivalent shunt capacitance.

Most calculators for small loops seem to use a formula given by (Hart 1986) that Cs=0.82*PerimeterInFeet. This does not reconcile well with NEC-4.2 models of STL.

(Straw 2007) gives a different formula for circular loops, derived from Medhurst’s work with solenoids, but again the values do not reconcile well with NEC-4.2 models of STL.

A series of models were run of a 1m diameter lossless loop with a range of conductor diameters and the SRF tabulated. A curve fit was made of ln(LoopDiameter/ConductorDiameter) against observed SRF adjustment factor (being SRF relative to c0/(2*length)). 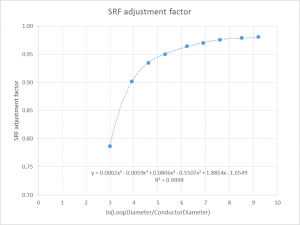 Above is a plot of the results, and a polynomial curve fit to facilitate estimation of the SRF of a loop of given LoopDiameter/ConductorDiameter.

Further work needs to be done to determine if there is a constant equivalent self capacitance that explains the impedance vs frequency characteristic of a STL (as commonly assumed).