The data above appear to ignore some important factors, and estimate some others based on an assumption of uniform current.

A comparison NEC-4.2 model was constructed.

Key assumptions for the NEC model: 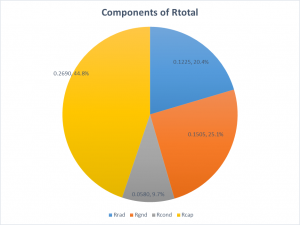 Above is a breakup of the input impedance Rtotal into three components:

Butler ignored Rgnd (ie Rgnd=0) and capacitor loss, and his estimate for conductor loss seems to assume uniform current. The values for Rrad and Rstr from the NEC model are different because they capture the capacitor loss, and effects of current distribution. Rgnd is significant, and including it makes a large difference.

So, the antenna with claimed efficiency of 68% is, dependent on ground and actual capacitor and matching, probably more like 20%, almost 6dB lower.

The additional losses reduce the capacitor voltage to around 3240VRMS (4600Vpk).