The line taken broadly is to introduce his own interpretation of efficiency and to challenge by experimental evidence other views on expected efficiency.

Unfortunately, the meaning of the terms efficiency and radiation resistance are often critical to understanding written work on antennas and it is best for authors to use accepted industry ‘standard’ meanings and to declare their interpretation for clarity.

Readers must keep the author’s meaning in mind when interpreting their work, and comparing their findings with other works.

(Underhill 2006) right up front gives some insight into his use of the term efficiency:

The Scientific Definition , based on the First Law of Thermodynamics (– the law of energy conservation) is that:

Measurements (of Q) take about one to two minutes

You might be impressed by his calling up the First Law of Thermodynamics as the basis for his definition of efficiency and evidence that it is soundly based, but we need to look carefully at Underhill’s accounting for energy, does the detail honour the principle.

There is a clear denial of all things that reduce radiation other than conductor loss. This is important because often, it is the things that are unidentified or that we casually ignore as irrelevant that ruin solution accuracy rather than the things we estimated incorrectly.

To illustrate his method, he gives Rho-Q Loop Efficiency Spreadsheet, a table of measured and calculated values for a 1m diameter loop.

The values given for the first seven columns seem reasonable, and the value calculated for columns 8 and 9 are quite consistent with his definition of efficiency quoted above.

However, his definition restricts an ‘antenna’ to exclude all things that convert RF energy to heat other than the loop conductor. Importantly, his ‘antenna’ excludes:

Little wonder that Underhill argues higher antenna efficiency than many other authors, he has:

Underhill is dismissive of the conventional theoretical estimate for radiation resistance of a small loop (which he labels ‘Kraus’s formula’):

In his table from (Underhill 2006) mentioned above, Underhill shows his value for radiation resistance as around 4000 times the above formula for the 1m loop at 1.8MHz.

Likewise he report’s Chu’s radiation resistance also thousandths of his own value for that case.

Similar disparity with conventional methods exists in a later work, the table at page 13 of (Underhill 2013).

Let us draw on the IEEE standard dictionary of electrical and electronic terms (IEEE 1988) for widely accepted meanings for some key terms.

A large sphere whose centre lies within the volume of the antenna and whose surface lies in the far field of the antenna, over which quantities characterising the radiation from the antenna are determined.

John Huggins described his STL (Huggins 2015) and gave a graph of measured Return Loss around the matched frequency. We are working here with the information he published and have no clarification on my interpretation of the data, and I make some reasonable assumptions for the purpose of demonstration. 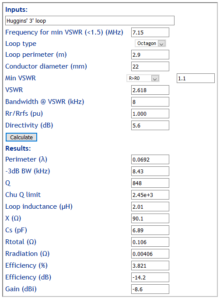 Above is an estimate of key loop parameters from bandwidth derived from the Return Loss chart. The model ignores self inductance of the tuning capacitor connection, and all impedances are expressed in terms of the main loop, but losses in the impedance transformation network, tuning capacitor and ground are captured in the measured bandwidth. Note that the Gain estimate is based on Directivity in free space and is likely to be more like -8.6dBi mounted near ground.

Rr is taken to be very close to Rrfs  based on the graphs in A method for initial ground loss estimates for an STL. Uncertainty in Rr plays into Efficiency and Gain estimates.

The calculator screenshot above gives the key data for an estimate of efficiency, it is simply Rrad/Rtotal=3.8% or -14.2dB.

It is informative to attempt allocation of the losses to various contributors, most of which are denied by Underhill’s model.

The tuned loop feed point resistance can be decomposed into three main components, radiation resistance, structure loss resistances (including conductors,  capacitors, and matching network), and an equivalent ground loss resistance. This is discussed in a number of the Duffy references given below.

The calculator screenshot above provides most of the key data for allocation of those losses and calculation of radiation efficiency, and further: 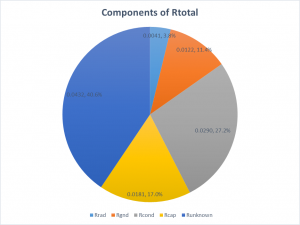 Above is a pie chart showing allocation of Rtotal to the various components based on the stated assumptions. dissection into these components attempts to explain the contribution to Rtotal by various mechanisms.

There is still a very large Runknown. The allocation leaves about 40% in the ‘unknown’ category, suggesting that there are significant losses in elements not identified (eg the ferrite matching transformer), and/or that allowances for some of the other elements are possibly low, and that is quite likely.

Rrad is estimated at 3.8% of Rtotal, so radiation efficiency is 3.8% or -14.2dB. It is unlikely that error in the estimate of Rrad would account for much of Runknown, and whilst the uncertainty of Rrad might well be +/-3dB, that still gives a confidence interval of efficiency as -11.2 to -17.2dB (7.6 to 1.9%) efficiency.

Underhill’s definition and method of calculation of efficiency is ‘different’ and yield values that are quite high and might seem very attractive, but they are not comparable with ‘industry standard’ meanings of the terms and care should be exercised in interpretation.

If you wish to compare Underhill’s efficiency with conventional radiation efficiency, you must adjust it for unaccounted structure losses, matching loss and ground loss.