Small Transmitting Loops (STL) usually require a capacitor to tune the loop to resonance for ease of efficient matching.

For an efficient STL that can handle moderate power, the capacitor must withstand extreme voltage, and must have extremely low equivalent series resistance (ESR). 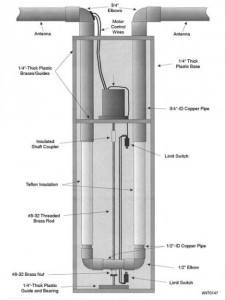 Above is Jones’ trombone match.

There is a dearth of meaningful measurement data to demonstrate the performance of this solution.

Lets consider such an arrangement to tune a 1m diameter STL for 14.2MHz.

The inductive reactance of the untuned loop is around 200Ω depending on the diameter of the tube used, and so requires a tuning reactance of about 200Ω.

As far as possible, this analysis uses dimensions that were gleaned from the reference, dimensions are converted to metric.

The problem can be broken into three segments in cascade:

Taking these from the bottom up… 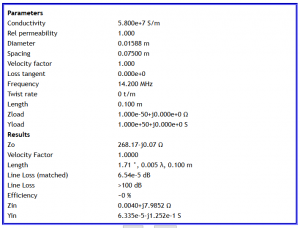 Above is a solution for the s/c stub assuming negligible reactance and resistance in the shorting bar. (The impedance of the shorting bar is quite small, probably around 0.0015+j2.6Ω, and has been ignored… it could have been plugged in to this stage but the amount is small compared to other uncertainties.) 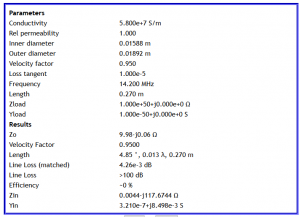 The impedance of the pair of o/c stubs in series with the s/c stub is transformed by the TL formed by the outside surface of the large tubes. 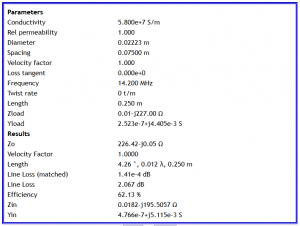 Above is the solution to that transformation, Zin=0.0182-j195.5057Ω. We have the desired reactance of around -200Ω, but with 0.0182Ω of resistance due to losses in that structure. Q of the equivalent capacitor can be calculated:

This is a pretty good result, but remember that it is calculated for ideal new materials, no corrosion, no moisture ingress etc… and lots of good ideas fail in the execution due to practical issues like these.

In practice, there will be some resistance in the shorting bar, some resistance in the various soldered joints, so it might be a little worse in practice, but still pretty good when compared to other solutions. Note that dielectric loss is small because only 10% of the dielectric space is occupied by PTFE. It is significantly worse if most of the space was PTFE, or worse, a polar polymer was used.

The scenario is quite complex, and extrapolating results for different conductors, diameters, insulators, bands etc is quite risky.

That said, this is less likely to be a good solution at lower frequencies / with smaller loops.