I had a contact with a newcomer recently, and struggling to hear him, I learned that he was using the 3030 antenna described in the WIA’s “Your entry to amateur radio” 2nd ed, the Foundation licence training manual.

Above is a graphic from the manual describing the “30 up and 30 out antenna”.

It is one of a genre of end fed wires that are so popular with QRP stations, and among them Foundation stations.

The first significant issue with this type of antenna is that on 40m where it will ‘match up’ fairly well, there is substantial common mode current flowing into the shack on the wire end attached to the ATU, and a similar current should flow outwards on the ground system conductor.

I created an NEC-4 model of the antenna as shown at 7.1MHz over average ground, the ground electrode is modelled as having an RF resistance of 100Ω, otherwise dimensions are as scaled from the graphic. The common mode current at the ATU for 100W output from the transmitter is 1.34A, quite a large current and in fact the highest current that flows anywhere in the antenna system, so the conductors nearest to the equipment contribute the most to radiation, and the magnetic field near the equipment is the highest for this system.

This issue of high fields near the equipment maximises the risk of disruption of the transceiver itself (the so called ‘RF in the shack’ effect), and of other household appliances coupled via the house wiring. On receive, the antenna system is tightly coupled to the house wiring and will pick up more power mains bourn noise than if the active parts of the antenna were located further away.

But lets look at efficiency. Basically, of the power delivered by the transmitter, that which isn’t converted to heat is radiated somewhere and is usually useful in making contacts. But more than half the transmitter power is lost in the soil near the ground electrode… that is a pretty severe setback.

Let’s compare the gain from the model with that from an ordinary Inverted V half wave dipole. 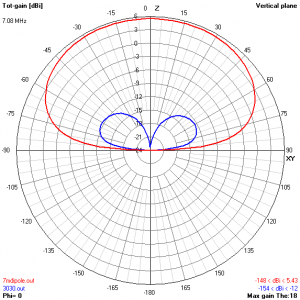 The plot above shows the modelled gain of the 3030, it peaks at about -12dBi at about 30° elevation, 15dB less than the dipole at that angle. That would mean that if you used 10W with a dipole on a path at that angle, you would need more than 300W with the 3030 for the same S/N ratio!

On 80m, the situation is worse. Antenna system efficiency is below 20%, and gain is low.

This is one of those antenna systems that can only be justified by the cry for mediocrity “any antenna is better than no antenna at all”.

If you can’t work out why the WIA would recommend such an antenna to newcomers, I can’t help you, it beats me!

End fed antennas have significant issues (as noted earlier in the manual), especially for a beginner, and most of the end fed antennas shown in the manual have these issues, the 3030 was chosen for analysis because the description was specific and allowed creation of a model without making too many assumptions.