The Naze32 is hardly new, but it does seem to have reached a maturity where it, alternative firmware and the support tools are functional and fairly stable.

The article describes a project to fit a Naze32 to an existing quadcopter that used a Multiwii flight controller on a Atmega 328P platform, and initial perceptions.

An early decision was made to try Cleanflight as first option, as it appears to work well, is responsive for user issues, has a good PC client and is configurable from Arduino using the EZ-GUI client that I use for Multiwii. 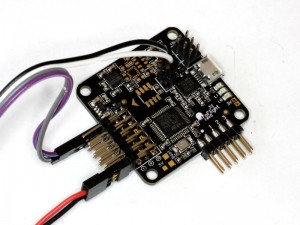 Above is the Naze32 undergoing Bluetooth testing before fitment to the quadcopter. 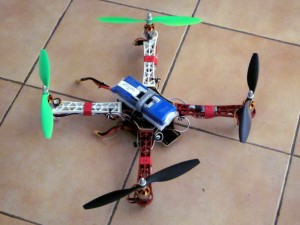 The mass of the fully populated quad is ~1200g.

Configuration was straight forward and a minimum of change was made for evaluation purposes.

Features lost in the basic ‘upgrade’ from M328P/MultiWii FC to ‘Acro; Naze32/Cleanflight:

Some Naze32 boards have a baro and / or compass. In my experience, the baro was not very good on any 8bit Multiwii boards I tried, but may be better with 32bit power to reduce noise.

There are some ‘likes’:

Testing the quad in the hand in ‘acro’ mode and HORIZON mode gave rapid stable response using the defaults, so no intial tuning seemed required.

Trial flights on defaults were very encouraging, the platform twitched a bit in gusty wind but was stable in quiet conditions and responded quickly but stably to rapid joystick movements (both visually and in Cleanflight Configuration graphs).

All this depends of components from China, and delivery has become unreliable and slow.