This is popularly held to be some nirvana, a heavenly state where transmitters are “happy” and all is good. Happiness of transmitters is often given in online discussion by hams as the raison d’être for ATUs .

You have an H.F. transmitter, some low loss transmission line, a good antenna tuner, and an antenna analyzer. And an antennna

So, let’s try out KL7AJ’s challenge… but mathematically where measurement error is eliminated. In this case, we are focussing on just one antenna system component, the ATU which itself is a quite simple passive network. 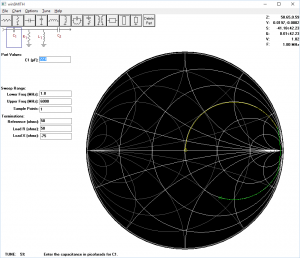 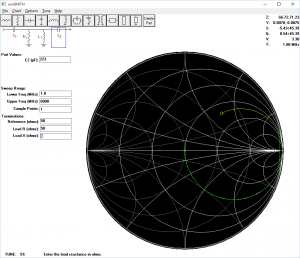 It takes only one valid example to show Maxwell’s statement is wrong.

Why is it so

The problem is that Maxwell silently dropped from his statement (1) above the requirement that networks and lines must be lossless, and the example calculated here shows that Maxwell’s proposition does not apply to the real world networks that has loss.

Walt Maxwell’s congugate mirror does not apply in the real world, and the concept is of no use in understanding real world antenna systems.

KL7AJ’s question might imply that a 50Ω source is typical of a real world transmitter.

Walt’s system wide conjugate match concept of course implies that where an ATU was adjusted for VSWR(50)=1, the transmitter is a Thevenin source with Zs equal to the conjugate, that Zs=50+j0Ω.

The issue is that typical ham SSB HF transmitters are not well represented by a Thevenin equivalent circuit at all, much less that Zs=50(+j0)Ω (Duffy 2010).

It is possible to design a transmitter to have a tightly controlled Thevenin equivalent source impedance of  50+j0Ω and although not easy, it is done in some specialised commercial and some ham transmitters for specific benefits, but it does not happen by accident, especially as a simple consequence of tuning of a PA as Walt suggested.