In designing a Guanella 1:1 balun, selecting a ferrite core that has been characterised by the manufacturer simplifies the design process greatly.

The manufacturer’s full characterisation includes curves for complex permeability vs frequency and from these the magnetising impedance of the core can be calculated. Note though that tolerances on magnetics are usually fairly wide and they can be quite temperature dependent.

The inductor will usually exhibit a self resonance that is not revealed by the above calculation, but can be reasonably well modelled by adding a small equivalent shunt capacitance, see (Knight 2008). This equivalent capacitance is usually very important and not so easy to estimate, and is often best estimated by careful measurement of the self resonant frequency of the inductor (taking care to back out fixture effects). With experience, one can make a fairly good first guess so that the process is not too iterative.

Some writers say that Cs increases as turns are increased, but (Knight 2008) shows quite the opposite. 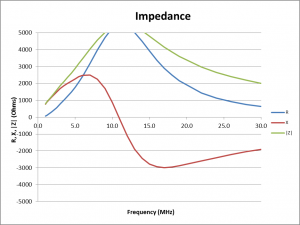 Above is a plot of common mode impedance of a FT240-43 ferrite toroid with 11t wound in Reisert cross over style and Cs=3pF. Different scenarios will give different results, but the form will tend to be similar to above.

Some tools that may be helpful include the following online calculators which solve for a spot frequency: 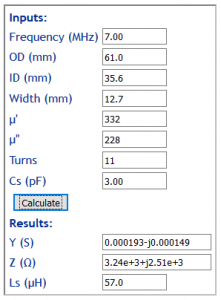 Above is a calculation from the first calculator for the same inductor. The calculated impedance is very sensitive to Cs, try it for yourself.

Calculators that ignore Cs are not suitable for inductors at RF. (Fairrite 2013) ignores Cs, most online inductance calculators appear to ignore Cs, and often that permeability is a complex quantity and that it is frequency dependent, be wary of published Al values as some are clearly affected by Cs.

The Excel spreadsheets named Zcm-*.xlsm at https://github.com/owenduffy/xl/src may also be helpful as they produce a graph for at-a-glance analysis. (The graph above was produced using this method.)