(Dodd 2010) describe a small transmitting loop (STL) and gave some meaningful performance measurements. It is rare to see such measurements and he is to be congratulated.

The loop is an octagon of perimeter 4.7m which at 14.2MHz is 0.224λ so although many will consider it meets the requirements of an STL, the common formula for radiation resistance Rr of a STL fail for perimeter above about 0.1λ (see Accuracy of estimation of radiation resistance of small transmitting loops).

Dodd gives calculations of one of the many simple loop calculators which gives Rr as 0.422Ω, it is probably closer to 160% of that value. This is an important quantity as it has direct bearing on calculated efficiency.

Dodd’s NEC model should have used a better figure for Rr, but it seems unlikely that the structural losses were fully included and its bandwidth prediction will be impaired. 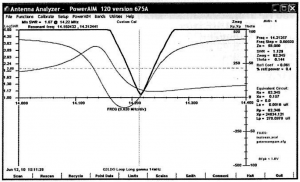 Above is Dodd’s measurement of antenna VSWR at 20m. This is most useful as it allows estimation of the half power bandwidth of the antenna. In this case, the antenna is not perfectly matched at its centre frequency, the residual VSWR is 1.07. The graph allows scaling off the VSWR=2 bandwidth as approximately 42kHz. 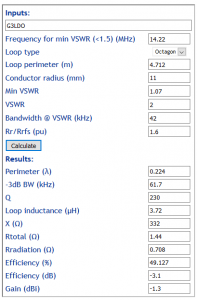 Calculate small transmitting loop gain from bandwidth measurement allows extraction of the half power bandwidth from the available data, and above, it is estimated to be 61.7kHz, which suggests Q of the antenna is 230. 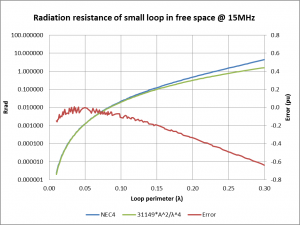 The value of Rr used in calculations was adjusted to 160% of the free space value based on the graph above so as to provide a better estimate of the actual Rr. Rr is also a little dependent on height over ground and ground type, but since that information is not provided, calculations are based on Rrfs*1.6.

Dodd’s measured VSWR curve when considered in the context of the adjusted estimate for Rr suggests that radiation efficiency is 49% which is quite good as STL go.