This article has been copied by request from my VK1OD.net web site which is no longer online. The article may contain links to articles on that site and which are no longer available.

(Tester 2013) described a coaxial collinear array for VHF/UHF. Tester describes the antenna a collinear is a vertical antenna whose resonant elements are connected along a common line (ie co-linear) so that each element is opposite in phase to its neighbour.

He is a little confused, in fact, the elements are in-phase with each other so that in the horizontal direction, the contribution of the current in each element to the far field is an additive or reinforcing one.

He goes on to say [i]f you are not into antennas, that mouthful is, fortunately, very easy to achieve... but is it?

Fig 2 shows the detail of the bottom connection. Note that the coax shield is connected to the outer conductor of the coax socket. The coax shield is therefore electrically continuous from the top of element 1 in Fig 1 over some arbitrary length to the equipment, then possibly on the building protective earth system, other radio ground system etc.

No attempt is made at impedance matching, but Tester states [a] properly designed antenna should be suitable for transmitting and receiving, so if you want to use the information later in this article to change dimensions and make (say) an antenna suitable for UHF CB radio (476-477MHz) you can easily do so.

Though an explanation of operation is given and many claims are made, no measurement data is given in the article to validate operation in accordance with the explanation or confirm the claims.

In fact, as noted previously, the objective is to feed each element so that they are in-phase. So, in this implementation, the connections at each feed point are transposed to offset the 180° phase delay of the feed line within that section.

Failure to obtain in-phase feed spreads the directivity pattern and reduces gain, so phasing is a very important objective, and a concept to have clearly in the mind.

An NEC model was constructed of an antenna system using the design. The nominal radiator is three half waves dimensioned as per the article at 147MHz. To be realistic, the shield conductor is extended 10 quarter waves down to and connected to the ground. For simplicity, the model assumes a non-conducting supporting mast.

Note that the model makes some assumptions as stated in this article, and whilst those assumptions are reasonable for the purpose of showing significant issues with the antenna system design, different variations of feed line, height above ground, number of elements, treatment of any conductive supporting structures could all lead to different outcomes.

Fig 3 shows the current distribution (phase and magnitude) on the 10 quarter wave feed line exterior (common mode current) and the nominal radiator. It can be seen that:

Fig 4 shows in blue the collinear far field pattern from the model. Lossless radiator gain is less than might be expected from three co-phased half waves with some separation. It has as much gain at high angles as at low angles, a sure sign of failure to achieve the intended directivity and gain. The gain figure does not include feed system loss (including 6.5dB of Mismatch Loss to be explained later).

The red line is a quarter wave ground plane 5m above real ground. It can be seen that the collinear does not have a significantly different pattern at low angles (where gain is a priority). The gain figure does not include feed system loss.

Fig 5 shows the modelled impedance at the coax connector.

If we make the assumption that a 50Ω receiver is connected by 50Ω line to this point, the antenna with source impedance around 680+j266Ω at 147MHz (the design frequency) with 50Ω load has a Mismatch Loss of 6.5dB.

Whilst there are many issues with the design and the implementation, the single problem that drives the feed line common mode current path in alternating phase is the direct connection of it to the lower antenna element. This design problem hints a failure to understand the principles of operation of a collinear of this type and the role of the feed line.

Fig 6 is of the internals of a 3GHz commercial antenna that probably works (photograph by Martin Ehrenfried G8JNJ).

At Yet another dodgy coax collinear I wrote about a design published recently in QST.

More recently, a ‘design’ has emerged in eHam forums that appears to be identical.

These antennas are intended to be some number of close spaced co-phased half waves with a system of coax sections with transpositions at each feed point to provide the co-phase drive.

Given that the elements are fed at near to voltage maxima and they are effectively feed in shunt, it takes many such elements to obtain an impedance anywhere near 50Ω, so short arrays will require some form of impedance transformation if a 50Ω or similar feed point is needed.

There are three common failings with implementation of this type of antenna:

So with that in mind, lets review the latest eHam forum design. 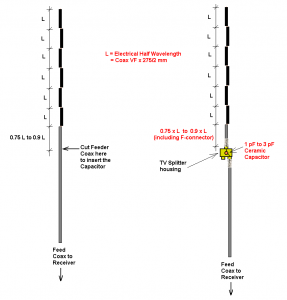 Above, an extract from the thread… and some more detail on lengths.

The design includes a form of impedance matching, but it is matching a flawed antenna. Fixing the issues mentioned will change the input impedance and that will probably require a changed impedance match. 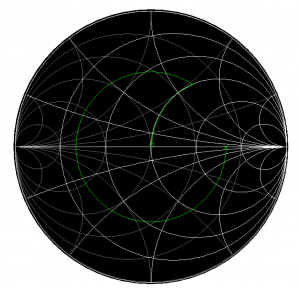 The impedance match was not shown conclusively to transform the load to 75Ω, but if it did, it suggests that the load offered by the dodgy collinear is around 260+j0 (VSWR(75)=3.5) at the lower coax transposition (not surprising). The Smith chart above (normalised to 75Ω) shows the transformation with 152° of 75Ω line and a series 1.5pF cap.