This article reports measurements on 40m of S/N as a receiving station in Melbourne of a 10W transmitter switched between a G5RV and M40-1 over a 1 hour period.

The experiment compares the antenna over a specific, but very relevant ionspheric path so it is more useful than ground level measurements in a car park or playing field. 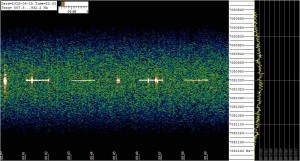 Above is a screenshot of the beacon signal switched between the two antennas.

The G5RV is in an inverted V configuration with apex at 11m height, oriented NS and fed with tuned feeders.

The M40-1 is a 1.6m long helical whip mounted in the roof of a Commodore station wagon.

Power at the feed point is within few tenths of a dB of each other, test results to do provide an imperative to measure it to a greater accuracy.

The transmitter located at VK2OMD Bowral was keyed with a keyer which incorporates an A/B antenna switch controlled by the beacon message (Another Morse beacon keyer – A/B RF switching). The modulation pattern repeats on a 5min cycle, it starts on antenna A with a high speed Morse ident, then key down for 1min at 1min at  on antenna A, then key down for 1min at 3min.

The receiver was a WebSDR at VK3LP at Heathmont Vic, 596km SW of VK2OMD and path elevation is in the range 40-50°. The antenna was a fan dipole at about 7m height and oriented EW. The audio was streamed back to VK2OMD where it was processed using SpectrumLab to produce the plots below. Signal was calculated in 20Hz bandwidth at the transmitter frequency, and Noise calculated in 20Hz bandwidth 50Hz lower in frequency. The calculated S/N ratio gives the best indication of the path as compression of gain due to strong signals affects both Signal and Noise similarly, and the difference in dB remains a good indication somewhat independent of those effects. Nevertheless, ionospheric fading can be expected to cause large variations in S/N.

Rather than perform a statistical analysis and come up with a single difference figure and confidence level, the difference in these antennas is so great I will leave it to the reader to form a view from visual analysis. The key statistic here is the S/N ratio, and there are observations approximately every 1s, so for each antenna which transmitted for 60s in a 5min cycle, there are 12*60=720 observations.

The second 1min transmission in each 5min interval is the B antenna (M40-1), the first is the A antenna (G5RV).

Try to form a view of the variation due to fading, is it 5dB, 25dB, some other number. Look also at how quickly the S/N can change 20dB on the same antenna. You will realise how futile common A/B comparisons are with just a few swaps and a subjective assessment by the other operator.

The following plots are for the six 10min periods of the test.

Did the results surprise? Is the G5RV as bad as often portrayed? Is the Hamstick like helical mobile whip as good as often thought? Show me the numbers, it is the scientific way to arrive at knowledge.

With some 1400+ data points in the comparison, this is a much richer data set than any WSPR or RBN test that I have seen documented, and although on this occasion I haven’t done the statistical reduction, the data supports a comparison of the two antennas with uncertainty in the low tenths of a dB (as discussed at Yet another comparison of two 40m quarter wave verticals with elevated radials over a 14,700km path using QRSS).

My thanks to VK3LP for providing the WebSDR used for the measurements.