This article compares a series of models of a small transmitting loop at varying height above real ground using NEC-4 and NEC-2.

The models are of an octagonal loop of thin wire of the same area as a 1m diameter circle over real ground (0.007/17). Height is measured to the centre of the loop, and all impedances are wrt the main loop. 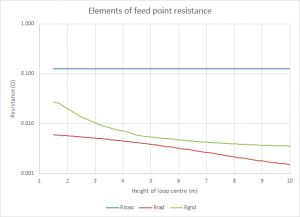 Above is the NEC-2 result. 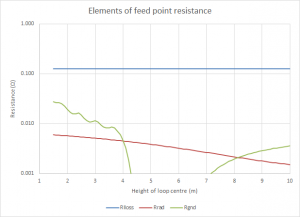 Above is the NEC-4.1 results of the same model series, and it can be seen that there is some kind of anomaly in the range 4-7m height where Rgnd becomes negative and radiation efficiency is greater than 100% (physically impossible, it is in conflict with the law of conservation of energy). The graphs with log scale are not capable of representing the -ve value, so the data points are just ignored but examination of the source data shows that for most of the domain where the Rgnd figures are not plotted, it is -ve.

Above is the model deck at 5m height. 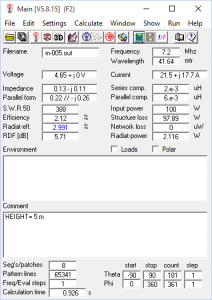 Above is the 4NEC2 summary screen for a run with the NEC-4.1 engine showing the efficiency issue. Others may wish to explore the issue, I would be interested in anything learned.

The results of this model seem invalid in some part of the domain, and the oscillation at lower heights may be due to the same problem rather than a true physical effect.

I have noted that the effects are sensitive to the ground type, ‘poorer’ ground is less inclined to exhibit the effect.

It may be my model is the problem.

(Vogler & Noble 1964) (NBS72) studied the effect of ground proximity on input impedance on a set of basic antennas in a range of configurations / environments. 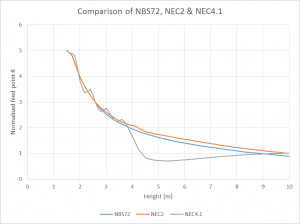 Above is a comparison of the NEC models with the equivalent results from Vogler & Noble’s study. Whilst we might be suspicious of the oscillation in the NEC-4 result, in that region it oscillates about the Vogler & Noble prediction, but both NEC-4 and NEC-2 eventually differ significantly from Vogler & Noble over part of the domain. The NEC-4 result between 4 and 8m is closer to Vogler and Noble, but might be just a little low as it implies -ve Rgnd.

An update to NEC4.2 was sourced. 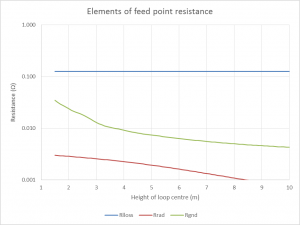 Above, the same model run under NEC-4.2. The wild excursions seen with NEC4.1 are not evident, and the results are quite similar to NEC2. 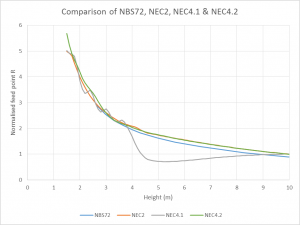