This article documents a series of NEC-2 models at 7.2MHz of a lossless small transmitting loop near ground for the insight that they might provide about underlying loss mechanisms.

Impedance elements discussed in this article are referred to the main loop.

Radiation resistance Rr (Rrad) is taken to mean that quantity that relates the total power radiated in the far far field to the feed point current, Rr=Pr/I^2. 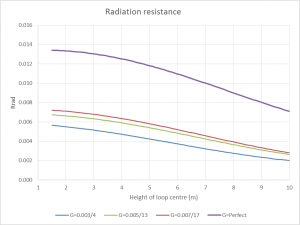 Above is a plot of Rr (Rrad) vs height for the three ground types and perfect ground. All curves oscillate at increasing height but converge on the free space radiation resistance Rrfs which is 6.4mΩ for the subject loop.

Rr increases with the fourth power of diameter, and this usually dramatically increases radiation efficiency (even though conductor resistance and capacitor resistance have increased).

Rr is a component of feed point resistance Rt and radiation efficiency is calculated as PowerRadiated/PowerIn=Rr/Rt.

Energy lost in heating the soil can be represented by an equivalent resistance component Rg of feed point resistance Rt. Since the loop structure in this model is lossless, Rg=Rt-Rr.

Models indicate that Rg/Rr is not very sensitive to loop diameter (within the limitations imposed by a small transmitting loop) which seems reasonable.

We might expect that Rg/Rr is sensitive to proximity to ground and the type of ground. 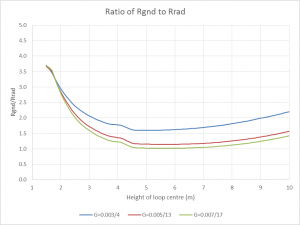 The response shown is frequency sensitive, the shape of these curves is similar on 80 and 20m bands if the X axis is scaled in wavelengths, ie ground loss rises rapidly as height is reduced below about λ/10 on 20-80m bands. Rg/Rr is approximately inversely proportional to height below λ/10. Whilst λ/10 is easy to achieve on 20m, it is a lot more difficult on 80m and impractical for most users.

Some take home messages about the 1m diameter loop on 40m:

We often see articles describing a loop of about 1m diameter for 40m at 1.5 – 2.0m height, made from RG213 coax and using some form of lossy tuning C (coax stub, FR-4 PCB material, broadcast gang caps with high R contact springs etc), and the ‘better’ ones might brag half power bandwidth of 25kHz, the poorer ones 100-200kHz. 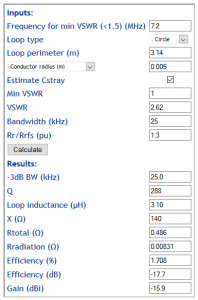 Above is a solution to the scenario using Calculate small transmitting loop gain from bandwidth measurement.

At 2m height to centre of the loop, the graph above suggests that Rr should be perhaps 30% higher than free space Rrfs, so about 8mΩ. Using the graph above, Rg is around three times Rr, so about 24mΩ.

The inductance of the loop has been calculated and the measured half power bandwidth gives a pretty good fix on the total loop input resistance Rt=486mΩ. Deducting Rr and Rg, we are left with 454mΩ total structure resistance which is a lot more than the resistance of a 10mm diameter copper conductor (~70mΩ) as a braided conductor has higher resistance than a smooth copper tube and the capacitor loss must be brought to book. In fact 95% of the loss resistance is due to the loop conductor and capacitor, and they could be reduced by 70% or more with more suitable components and materials. 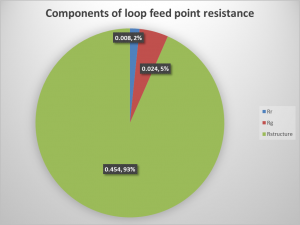 The pie chart above shows that Rr, the only component that gives rise to radiation is just 2% of Rt, meaning radiation efficiency is just 2%.

Staying with the same loop diameter and height above ground (same Rr and Rg components), but reducing loop structure loss, we can improve efficiency. 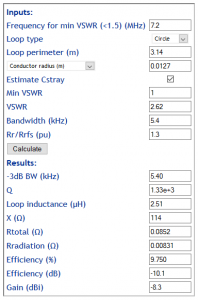 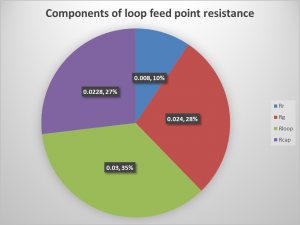 Above, the components of Rt. As a result of reduction of the structure resistances (loop conductor, capacitor), Rr is now 10% of Rt, and radiation efficiency is 10% against 2% for the previous case… a 7dB increase in radiated power.

Note that bandwidth is quite a deal narrower, it is a characteristic of small efficient loops, but the increased conductor diameter helps not only in reducing resistance but also in reducing inductance which helps bandwidth.

Rr is proportional to the fourth power of electrical diameter, so physically practical loops have extremely low Rr on 80m and require expensive loop components to offset such low Rr and to win usable bandwidth with reasonable efficiency. 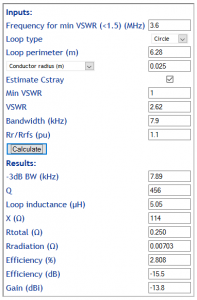 Above is a design using a 2m diameter loop of 50mm diameter copper with a vac cap (Q taken as 5000), 2m centre height above average ground. Half power bandwidth is just 8kHz and efficiency below 3% despite a fairly extravagant structure. 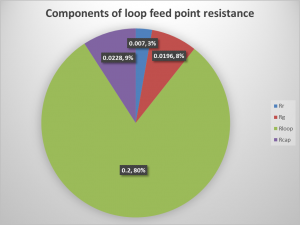 Above, the components of feed point resistance. Even though the loop conductor is 50mm diameter copper, it consumes 80% of the RF input power.

Sure, you will get contacts with this antenna… but you will get more with a lower cost half wave dipole if you can accommodate it.