There are a number of USB-RS232 adapters available, among them Silabs, FTDI, Prolific and WCH.

The Silabs CP series adapters have been reliable but not very widely used.

The Prolific adapters are, well, prolific… but given their major compatibility problems and poisoned drivers, they are not a good choice.

FTDI was a good choice until they distributed through Microsoft Windows Update their device poisoning trick to disable chips they thought counterfeit… though they seemed to have backed away from that action.

The new kid on the block is an adapter by Chinese company WCH, chips that appearing in lots of low cost devices, eg Arduino Nano clones with WCH adapters instead of FTDI selling for around A$3+ on eBay whereas the FTDI equipped Nanos are more like A$12. 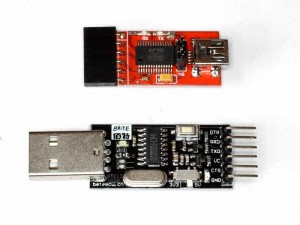 Above are two inexpensive adapters for Arduino boards, the upper one is FTDI based at A$8 each (inc post), and the lower one WCH based at 3 for $3.60 (inc post).

The WCH adapter documentation is sparse and mostly in Chinese. The driver installation program is multi language, but poor English support.

The WCH adapter was tested with a few different applications and mostly worked ok but occasionally locked up and required either USB removal and reinsertion, or less frequently reboot of the Windows 7 host.

Sure they are cheap, and the WCH-Nano combination are real cheap, but not very polished and less reliable than the FTDI devices.

Given the antics of Prolific and FTDI, selecting a preferred adapter type is always a risk, especially when the chip is embedded in a much more expensive device.

The ONLY adapter that I can say I have had zero problems with has been the Silabs CP series.