(Austin et al 2014) made measurements of feed point impedance of a small transmitting loop using a calibrated transformer, and discussed the loss mechanisms. They also extrapolated their measured data to a larger conductor.

This article is an update of my article of 05/02/2015 which contained some errors as a result of my incorrect interpretation of the legend in Austin’s Fig3. This article is a rework to correct that error and those that flowed from it, my apologies to the original authors and readers… Owen.

Let me focus on their measurements, the loop was:

They did not report the capacitor loss, but gave some likely range from manufacturer’s data. 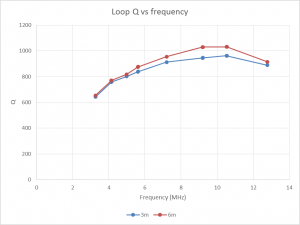 Some back of the envelope calculations of the loop basics at 7.2MHz in free space are:

The measured Q at 3m and 6m above ground at 7MHz were 913 and 955 respectively, a little lower than the calculated free space figures which is expected as Rr will be a little different and equivalent ground loss resistance will increase Rtotal by something of the order of Rr. These correspond to half power bandwidths of 7.9 and 7.5kHz respectively, and on the surface of it, suggest that loop efficiency is better than many loops described with larger loop conductor.

A NEC-4 model was constructed to compare the measurement results and a model estimate.

Rr is taken to be the resistance that for a given feed point current would account the total power in the radiation far field.

The loop has a very slightly larger perimeter (2.6%) than the circular loop so one expects a slight difference in calculated loop resistance. 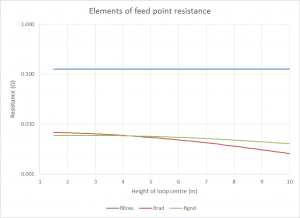 Above, the results of the NEC model used to disaggregate loop feed point R into its components.

Calculated R is a little higher than Austin et al, understandable as we do not know the actual ground parameters at the measurement site..

Rr differs to Austin el al which treats Rr as a constant value. The value derived from the model varies with height above ground.

(The first pass of this article was based on models using NEC-4.1, but anomalies were detected for some ground scenarios and referred NEC’s author J Burke who provided an update to NEC-4.2 and its GN 3 ground worked better for the most part.) 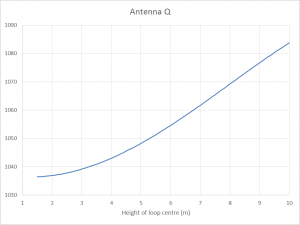 The main purpose of Austin et al was to: 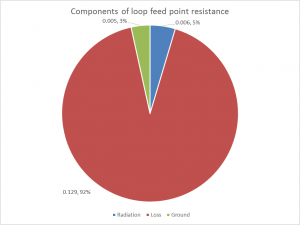