The Slot.it CA20Z is Ford GT40 supplied as a ‘white’ kit which requires assembly and painting work. 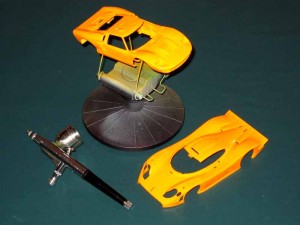 Above is the part assembled bodies for a CA20Z and CS23B after painting with Vallejo 73.601 grey primer surfacer and two full coats of Tamiya X-6 acrylic gloss.  The inexpensive Chinese airbrush pictured has been used for a few bodies, and worked very well.

The bright colour should be easy to see in dark parts of tracks.

The front axle was modified to use M2 grub screws to set the ride height.

The guide was changed to a CH07 guide for timber tracks. This one jammed in the chassis which had to be reamed out to accommodate it.

The car is a sidewinder configuration with the Mabucci style MF08 motor with extended shaft at both ends. The shaft ends extend out to about the mid point on the rear tyres with about 1.5mm clearance to the tyre. 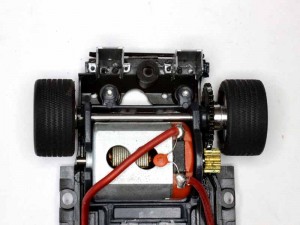 The shaft is chucked in a good battery drill, the motor ventilation holes covered to prevent ingress of grinding swarf, and the other end ground almost perpendicular on a bench grinder. The edge chamfered with a fine cut file, and then the same done to the other end. Trim the bell end first, there isn’t enough shaft left on the case end to chuck the shaft after it is trimmed, and get it right first time. 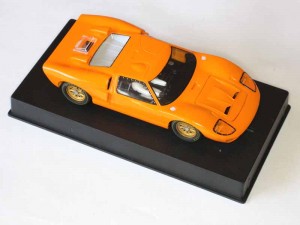 Above is the built car. 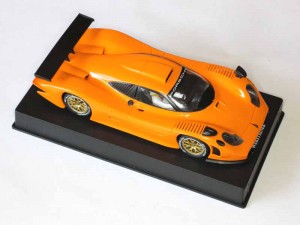 Also painted and assembled at the same time, the CS23B Porsche body above.